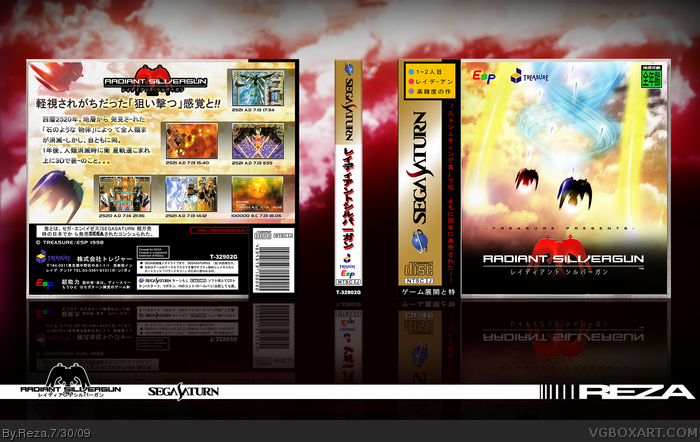 G'day!
While at a friend's house a few weeks ago, we came across an old copy of Radiant Silvergun for his long forgotten Saturn (bastard) and it instantly inspired me to do a boxart, but of course, with my usual Japanese spin. I included the Spine Sleeve, which pretty much only boast about how good the game is, as it is part of the packaging, so hence why the black strip to the left side of the CD case is missing (most CDs, games, etc that come in compact disc cases in Japan carry a Spine Sleeve).

Pretty much, there is only 2 different bits of media for Radiant Silvergun, so I thought I'd have another crack at the cloud brush and try to emulate the official cover's feel and also work in some in game action. I decided to go with the (I think it's the) 5th stage boss' laser beam effect, yet at the same time trying to keep a realistic edge to it all, utilizing a few vector brushes to achieve the effect.

The front took a lot of image blending and layer effects to get what I wanted out of it. I was also aiming for the vibrant color feel, which I think I achieved. And added the ships in because, well, they are the stars of the game.

It took a lot of careful planning on the back as I had a bit to fit but not much room to work with. I used the official screens as there is not much choice from the net, adding the loover effect behind them to make them stand out a bit. The dates and times things under them were on the official and I thought they looked pretty cool so I decided to bring them across. Again, to match the front, it took a lot of careful image manipulation and blending.

Not much to say about the spine other than it's a spine, added it to help image balance (for some reason it looked really bizarre without it).

As usual, temp made by myself from the ground up, along with the Treasure and ESP logos. I also had to make the logo from the ground up, including using about 10 different fonts to get the same looking text as the official. It's a little different, but I think it has the same effect. A big thanks to DaFont and also to Act Select for their wicked selection of retro Sega fonts, they came in very handy!

Anyway, hope you all like. Full view please and C & C!!

Damn dude, the color scheme for this box is gorgeous!

Do you actually know the japanese on the back?

#2 Thanks for the comment. I sort of do, my friend who can speak a fair bit of Japanese reckons its just a shortened version of the western blurb so i'm guessing he's right as he tends to know a fair bit about the launguage. This time though, i got lazy and just ripped it from Wikipedia Japan and in turn got lucky, woohoo!! But generally i bug him to help me translate it before getting sick of asking and just try to do it myself using old text books!

The colors are so vivid and pretty. It's pretty slick looking, nice traditional design on the back, I absolutely love the front.

I love the Saturn and I love this game. 3 thumbs up!

On another note, there is a little larger of a selection of RS art out there than you may think. I remember when I did this game for Wii (and deleted it after some time) I was able to find some character art and some alternate ship artwork as well. However, I don't think this design needs any of that.

This box is fantastic! I love the front. You're friend is really lucky to have Radiant Silvergun.

So I could ask you for help with Japanese on my next box? :D

#5 yeah i now i remember comming across a few of those but, yeah, i had already started witht he design so i left them out.

#7 he is, he's also got a few other older greats, like Sonic CD for Mega CD. But he never plays them so he's a dirty bastard (it would cop a flogging at my house!!)

And thanks for the comments and favs guys, glad you all like it! It certainly was a fun box to make!!

The colors are fantastic! This is definitely one of my favorite of yours, great job.

Just beautiful. The front is so gorgeous it could be artwork for an Anime soundtrack music album (and I say this in a good way). Great job.

dang Reza, this is just awesome.

Wow!
Sorry that i didn't notice this earlier:o!

Faved and author faved. Steal your friend's copy because this game is quite rare. Worth upwards of $160 complete.

#17 Hahaha its pretty tempting!! Unfortunately, he too knows the game is uber rare and worth a mint and keeps it safe, hence why it hardly ever comes out...dammit.

Yay I put this in the HoF thread and now here it is! BOOYAH!

Holy crap, it is too, thanks man!! And thanks to all who faved and commented.