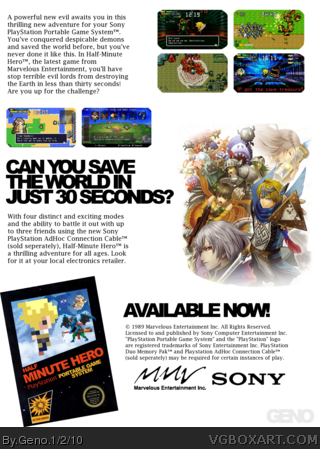 Happy 2010, everyone! I've been waiting quite a while to say that.

Alright, I suppose this box needs a bit of explaining.

Half-Minute Hero is the most refreshing and wonderful game I have played in quite some time. As such, I decided to make a box for it. However, as there is absolutely no art for this game, I thought it would be fun to make an 8-bit parody box using only sprites from the game. However, for some INCREDIBLY idiotic reason, I decided to recreate said sprites in Gimp instead of MSPaint. I have no idea why. It took much longer than it should have as a result :P.

As you can probably tell, the box was originally supposed to be a parody of one for a certain well-known NES title starring a lively Italian. However, it sort of evolved into something a bit different, so I thought that I should dress up the presentation a bit more to make up for the loss of humor. I did not intend for the presentation to outweigh the box, but I don't mind it.

As I hope you can tell, I was attempting to mimic the feel of a 1980's print advertisement to coincide with the retro box (the work of Mr. silenig comes to mind). To that end, I'd call this sort of a failed attempt, due in no small part to the aforementioned complete lack of resources. The result was me being forced to use a piece of artwork that would NEVER, NEVER, NEVER be seen advertising a video game in 1980's America. I tried to find a picture of some irrelevant knight to use, but I couldn't find anything good, so please forgive me :P. If anyone has any approriate art they could point me to, that would be great.

That's about it, I guess. Now please buy this game.

#2, about four times :P. It was completely ignored every time, probably because yesterday was a holiday.

Besides, this version is SLIGHTLY different :P.

I love the advertisement style.

No I cannot save the world in 30 seconds.

#5, it's not nearly as difficult as it sounds. Technically, you are given as long as you can afford :P.

#7, I've seen all of those, and most of them were not suitable for what I was going for (except the third one, obviously). No need to be a smartass :P.

Im not sure whether I like this or not, I love the idea but the presentation seems to be too much and takes attention away from the box.

I think the feel of this box's presentation adds to the box itself. Unfortunately, the box design isn't the centerpiece of the ad, but the box is nicely designed and the ad feels like the ads of the time from Nintendo and Atari.

#10, the box was placed where it was in every single ad I used as reference; in the corner, as an afterthought. However, I suppose that I should have sacrificed authenticity to focus on the box.

#11, I know that they did that with their ads. I said it was unfortunate because the focus here on the site is obviously the box design. Don't get me wrong, I really like this, I did fav after all.

Quite nice, looks pretty authentic but lacks a little something. Try adding a background as a lot of 80's game advertisements incorporated a background of some sort into them. The characters could have been blended in a bit better too i think. Otherwise i think you've done a decent job.

I will take the opportunity to say i don't like the way you posted it several times until it got noticed, i think thats an incredibly childish thing to do, but i will not let it shadow my opinion of the box as it really is a decent box.

I LOVE this game.
Box is pretty cool too.

Lol, wasn't trying to be smartass. I was trying to help you out. Don't get so defensive

Faved because this looks EXACTLY like one of those old posters. Top notch and original. Haven't played the game yet, though.

I can save the world in just 30 seconds.

And in the hall you go! If not, somebody need to come and help me push.