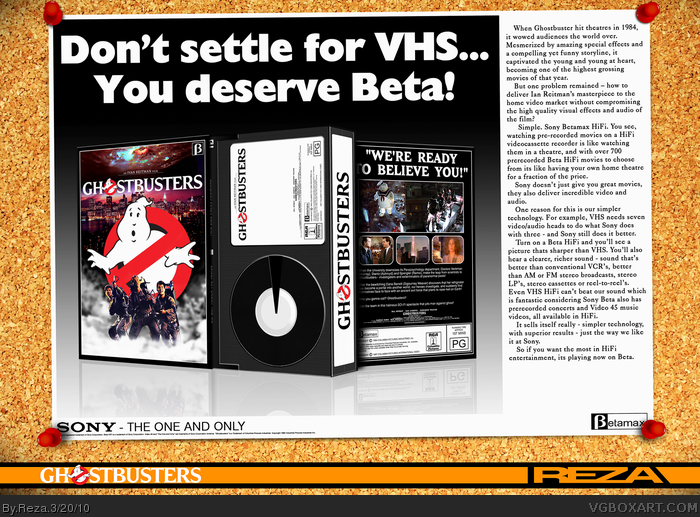 G'day!
Well, its been a few fair months since my last upload, unfortunately life has brought some very time consuming things upon me over the last how ever long its been since I last uploaded. Recently, however, its started to slow so hopefully I can start getting back into the box art scene again (don't stress Mr. Z, i'll be shooting my half of the collab over in the next few days!).

Anyway, enough dribble about me. I present my latest work, Ghostbusters on the 1980's tape format, Betamax link I chose the format for a few reasons but mainly because I could make a 1980's style advertisement presentation for my portfolio and for uploading here.

Most of the template and logos are built from scratch or re-built from poor quality scans online. I chose a more simplified cover as it would have suited the art design of both the format and era, but in saying that, I spent several hours cleaning up the picture of the Ghostbusters on the front as I could only find poor or small resolution images. I chose New York for a backdrop on the cover as it is a big part of the movie, and for the fact that I had trouble locating decent images to attempt to make a mural style cover (another style that was popular on some 1980's movies posters/covers), plus New York is referenced regularly in the film and is a big part of it, so I didn't think it would hurt. The logo does appear twice however this is also the case on some other later VHS and DVD releases of the movie.

The back is a fairly standard affair. I remember my dad had a Beta movie when I was a kid and it had a wide panoramic shot on the top like I did with the back, hence why its is there (this is rare as Beta predates 16:9 aspect ratio). I also made the tape, which I must say was easier than what I though it would be to make (even easier to make 3D). Personally, I was pretty happy with the way it turned out.

The presentation was probably the trickiest part of all. Basically, I wanted it to resemble Sony' print advertising campaign of the 80s/90s. A lot of time went into researching other ads from the same era, most of the ads being for Betamax hardware itself. The tag line came from an old ad pushing a Beta player that was (at the time) top of the line (it feature similar buttons the PS3 console - no moving parts, sold around 1990). This title works on many different levels, so it was a natural fit for the project. The wording comes from another print ad for a Betamax Hifi player, which I reworked a bit and changed the top few paragraphs to incorporate the film. Logos and tag lines again from similar print campaigns, as well as the overall design. Half tone effect added to give a more realistic feeling of a printed product.

I will say that the advertisement around the boxart outweighs the art itself, but in saying that, it also helps to compliment the entire work as a whole.

Anyway, just look at the damn thing!! In full view of course!! See version 1 for a clean, non-mounted version.

Dude..... This is crazy! Its so original and the front and back both look perfect. Beta FTW! :P

You uploaded it! Everything looks faithful to magazine ads of late 80s/early 90s, very sleek and attractive, and of course 100% official looking. Oh, and I just love the humor in the accompanying text! The box itself stands on its own, but IMO the ad format of the presentation doesn't outweigh, but it rather compliments the whole piece. I hope it gets the attention it deserves!

I don't know if we were having some unspoken 80's ad-making contest, but you definitely won :P.

This move was just on Comedy Central, great box by the way

You get a fav for this one, dude-bro!

Wow, thanks for the great feedback guys! I really didn't expect this to get much attention to be honest, i'm glad you guys liked it!!

Where did the Betamax template come from?

#16 i made it. Lots of research and lots of Googleing.

So glad it made it into the HOF!

Ha ha! Not in a million years I'd think I'd find a BETA cover.
It's impossible to view all covers, so accept my apology for such a laaaaate reply, lol. Great. It does look '80s. Faved.