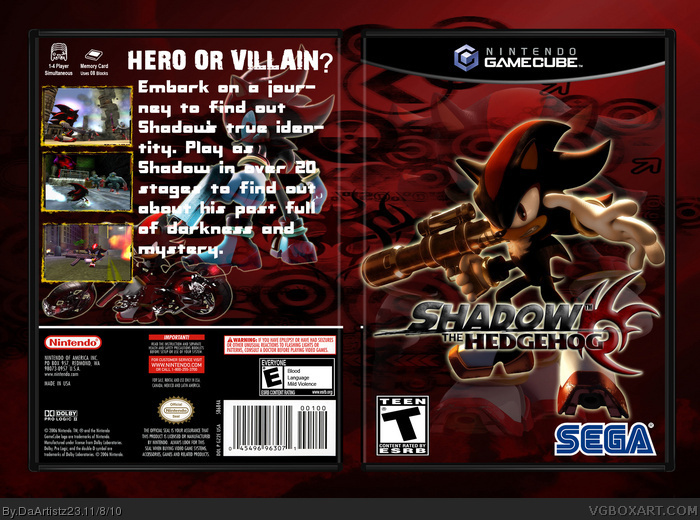 Hi, this is my first box. Dunno if this is good or not but its my first so my best is still to come.

Credits to qwerty334 for template and sonicthehedgehog for render on front.

Good, I like it; however, there is one small problem I could point out Â– where is the ESRB on the front of the cover?

#2 Alright thanks. Will update soon.

i'll update this and put on the esrb logo.
stiil everything same

#7 Ok thanks. I'll try to do something soon. Did you like the box?

*not feeding the troll*

Soundwave, why do you keep stalking me? It's not getting you anywhere and its not cool to stalk, all its doing is making your reputation go down. Just quit, it's not doing you any good.

Stalking? You make me laugh.

Umm lets see...I point out that you have an alt account (breaking the rules, you think you are so special and you are allowed to, which isnt hard, because stupid, little children like you make it obvious. Starstrike, Swagdogg, you even told me yourself you used to be Swagdogg. You don't even deny it, so basically you admit it. You act like Ive spent hours, well guess what, dont flatter yourself.

Who was the one who said 'you have a skanky-pussy' homepage? and who was the one who said I 'should lik ass'? Oh thats real mature isnt it? You should count yourself lucky that you weren't banned. I don't care wether your banned or not I just want you to get out my way, don't post on my page or boxes just because I wrote a few words about the alts, and also troll with the other trolls around here and continue to make your 'Oh dudes lk wat I slappd up in 5 mins, oh yh im a beast at boxartzing yh' boxes oh and 'lk at my copy + pste skills dude'. You don't attack people personally because of one piece of criticism, you don't see me going 'DaArtistz23, this box art is shit' which i could have but I didnt because I don't like saying the truth.

My reputation is not going down, why would my reputation go down to you? Who are you to tell me what is cool? Ive been here for 2 and a half years, you wouldnt know because youve been here like a month, the only time youve actually commented on someone elses page or art youve just attacked them. You have no reputation little boy because know one actually knows you, so thats why you should count yourself lucky and not banned.

So tahmim, just get out of my face.

Ive said everything ive had to say, I really didnt want to give this much time, but this guy was really getting on my nerves.

P.S Ive known this guy from before.