[ Buy The Fall at Amazon 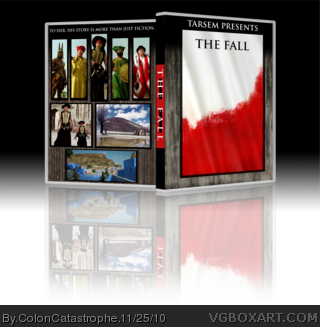 So, a little backstory, I LOVE Tarsem. The Cell was visually euphoric, although a little light in other areas. The Fall, his second film, which he funded himself, is a visual masterpiece. Essentially, it's set back in the early part of the 20th century, inside of a hospital. A stuntman injured himself on set and is unable to leave his bed due to his injury. A young girl befriends him, and he begins telling her a story that you see unfold through her imagination. It's breathtaking, awesome, and worth at least a view.

As for the box, since it's a film based off of visuals, I wanted the least amount of text possible. I can understand how that would turn some people off, but I feel like stripping things down to the core helps express what it's about more than lots of text. I guess that is a common theme in my boxes.

The cover is a large sheet the characters of the story encounter in the desert. The back, while being very light on details, tells, for the most part, the entire film. The tagline lets you know it's a man telling a female a story. The five characters are visible at the top, with a few screens thrown in to show off the beauty.

I feel like picking up this box, you can see the characters and get a glimpse of the scenes and not scroll through a wall of text.