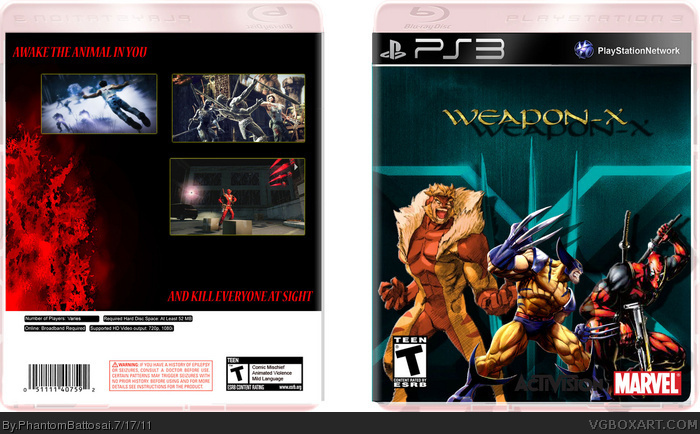 so boring... this is just terrible.

#2, is saying "this is just terrible" going to help this artist improve? No. Be constructive. It's a rule people forget to follow.

PhantomBattosai, I took some time to browse through your gallery, and here's what I think. I think you could spend more time on your covers. While it's fun to make covers in an hour, good ones can take many hours and even days of brainstorming. Browse some covers from our top artists, look how they make their covers, and see if you can mimic what they do. This cover in particular needs a better sense of direction. It could use a description, a better screenshot layout, and more appealing backgrounds. If you'd like help, PM a high ranking artist, they should be willing to help a little.

#3, pretty much this. Nice idea though.

Man, I was so hoping to see some X-men when I opened this. Score!

Apart from that, quite a dull box. It's not bad, but it's... Odd, I guess. There's a bit of contradicting style going on here. Though Woverine, Sabertooth and Deadpool are in a similar style (something many people fail to accomplish), the background and logo are a bit off. The colour scheme of the front is also a bit wierd, it's kinda all over.
The main thing about the back is that it needs a description. It's not to hard, just write something up that sounds plausible. Say this game is about Prof X being kidnapped, and Wolvie, Sabretooth and Deadpool had to save him (Yeah, makes no sense, but whatever). Then somthing like would do:

"After yet another fierce battle with Magneto, the X-men return home. Upon arrival, they are greeted by a quiet and empty mansion. Professor Xavier is nowhere to be found. Picking up a strange, familiar scent, Wolverine runs off into night...

In this Marvel epic, you'll be put in the shoes of the "Weapon X"-team; Woverine, sabretooth and Deadpool, in a race against the clock to save Professor Xavier by the greatest threat since Galactus...."

This was written by me in just a few minutes. It's no so hard really, but if you've got troubles, send me a message. I'd gladly help! :)

Other than that, Nice box!

All the artwork you used are from marvel vs capcom games! Good job