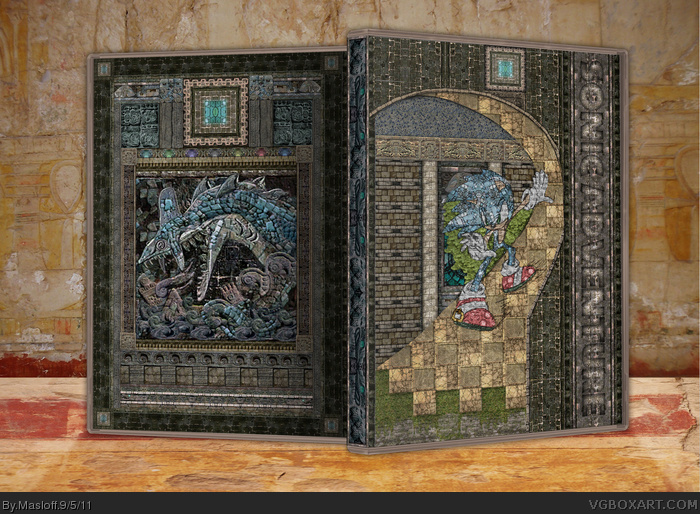 Here's mine. -hand drawn cover by myself-
put together from scrath. And high-res-ed images by me.

Yeah I made a Sonic box. I had a vision/dream for this one to come to be.

I really like the front, it's got that medieval look to it :) but may I ask what a dragon is doing at the back of a Sonic box? Are there really dragons in Sonic games? I really don't play much Sonic games, so I really don't know?

The logo placement on the front is fine, but it could be a bit more visible imo. and great job! on the hand drawn Sonic. I'm really liking the perspective and the way he's sliding down :)

#2, Ancient ruins is more of the look.
And that's no dragon . It's kinda a spoiler so, play it XD

Yeah, the box looks really aged (in a good way)

THIS is HAND-DRAWN ?! Loll this is Awesome. +Fav

Oh my god, this is fantastic! The second i saw this, it screamed 'ancient ruins' to me.

#3, I wouldn't say it's a spoiler. He's shown in the opening FMV. The explanation of "Water monster, not dragon" definitely isn't spoiling anything. I think this is a spectacular concept, though the drawing is pretty sketchy, and some of the tiles are blurry due to stretching (I assume.) it's still a great idea, and executed pretty well.

#8, i left it sketchy, but I tried to make it less visible. But to show it was hand drawn.

Yeah, some of them were quiet difficult to make highres without looking bad.

Took me a while to understand what was going on, but still amazing work. Love the idea, it was done pretty good.

The back I've seen before, on Sonicstyle.org

#13, You might've seen parts, but I made that from srcrach just so you know.

I did not steal anything.

The far right side of the top banner.

Spectacular, the amount of work you put into this definitely shows.

This is so good love, I can't wait to print it out.

Wow, hardcore work! I think you can make the logo more visible though.

Not bad An Ancient Ruins theme is refreshing among the endless tidal wave of Sonic covers that rarely innovate or inspire. The muted colors and generally darker tone is not something you'd expect from a Sonic cover, which is why it usually works to such a degree.

I would point out that, while admirable that you'd create the majority of the material yourself, the image of Sonic, specifically, appears somewhat amateurish in contrast to his surroundings.

@3 Me thinks I know what that 'Dragon' actually is :D

I wish I could like this, but I honestly see too much going wrong with this box.

At first we have the differences on the images' resolutions, as there's places when the difference between one texture's resolution and the one right next to it becomes way too bigger and causes one of them to seem way too blurry, as it's contrastes to a non-blurry one (For example: link link ); this is specially noticeable on that 'Dragon' on the back, which looks like it was three times smaller and you just scaled it to fit the temp's size (For example: link link ) and in the front's image, where the yellow tiles meet the darker bricks (For example: link link .) I understand you're using the game's textures, but I think you should have found a way of emulating or recreating the game's textures in high resolution (Or at east at an even one).

Apart from that, the places you used the same texture flipped, apart from being too many, are too noticeable, mostly in the borders, and rather odd looking when you realize they're there (For example: link link link link link .)

Your hand-drawn Sonic, as sd1833 said, looks amateurish and the pencil lines doesn't match the style of everything else. The blue tiles on Sonic look all squeashed, plus the fact you used many different textures for it (At different resolutions again) makes it look even more messed up.

This tile here link looks out of place and makes the front feel unbalanced and heavy at the top, my suggestion is that you remove it so it looks more balanced.

The logo is almost impossible to read and doesn't fit the rest of the box at all, the fact that is over a cluttered texture doesn't do it any goods.

Finally, the color scheme. I undertand you were going for an Ancient Ruins theme, but the colors in here are so depressing, look actually odd and simply don't fit the game.

Overall, I think the idea was neat, but the excecution was poor and the result is very unpleasant to the eye. It's great when you have a nice idea, but you shouldn't sacrifice aesthetics to reach it. Try to find the balance.

While there is a lot going on (Maybe too much), I can tell you put a ton of work into this and it looks really good.

Fantastic aesthetic. It's a shame that the image on the back is grainy, but exceptionally done nonetheless.

well 23 & 25 I thank you for your honesty and critique. And I will do my best to try and fix what was said... But I will not make it less depressing.

But I do not think my art skills are amateur

Thank you everyone. I think I shall make more "design" boxes

Can I has printable? For mah PC or Cube Version :3

#29, sure thing, in all honesty it's universal

@30 So awesome thanks! I may attempt to pt it on the spare 2 disc steel book I have and use that for my pc version :D

#31, Post pictures of it for me when you do print something

@32 I'll see what I can do. May print it onto a sticker twice then add some protective plastic fro the outside.

Congrats. Have a reward:

#35, This is the best gift i have ever gottin XD, thank you bro.

How in the name of holy FUCK did I miss this?

Woah, thanks Mub, I didn't even know this existed. O_O

No seriously this needs MORE favs.