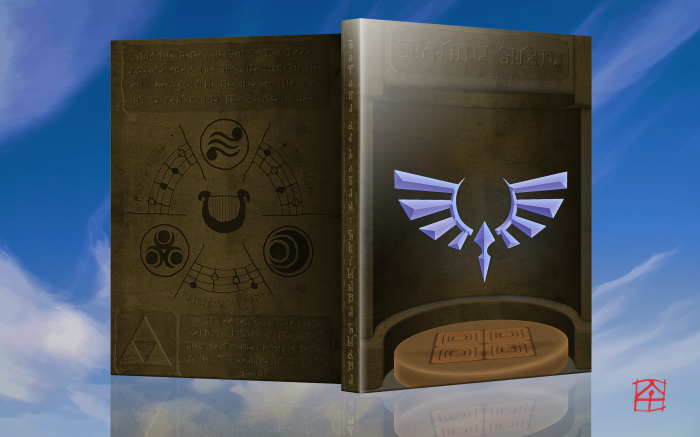 I absolutely love this box. It's a great example of how much I've improved over the years.
And the little red thing on the corner is going to be my signature now.

BACK:
TOP: may the hero, chosen by the gods, descend from the sky and banish the evil forces with the aid of the skyward power and the sacred blade.
MIDDLE: Din's Power, Farore's Courage, Naryu's Wisdom (Clockwise)
BOTTOM: trials of power, wisdom and courage awaits in the hero's quest to get the ultimate power, as he will command with a pure heart.

FIRST to say how awesome this is.

The text is impossible to read (well, in my point of view) but that's really not what this box is all about,

great perspective on the front and beautiful fitting textures/symbols all around, which results in an awesome minimal box to be proud of.

I think you're quite a candidate for winning the comp. imo.

O, I thought this was for a minimal comp. my bad.....(hiding in corner)

The text is in Hylian, so unless you understand that language it'd be impossible to read regardless of the point of view.

The shine on the front is way too strong in my opinion, but the box itself is fantastic, as mentioned in the WIP thread. I like the originality you have here and you pulled it off well.

I agree. Other than that, it's ah-mazing.

I also agree, but otherwise it's an extremely strong box.

I love it, it's really well done, but I have to admit I'm not a fan of the illegible text. Having never played a Zelda game myself, I wouldn't know what game it was if it wasn't for the title above. At the very least, I think the front should have the title in English.

Hmm, I haven't tough of that. I'll see if I can change it.

(For the people who can't read Hylian)
Translation-
Front: Skyward Sword
Spine: Legend of Zelda: Skyward Sword
Back (Top): May the hero, chosen by the gods, descend from the sky and banish the evil forces with the aid of the skyward power, and the sacred blade.
Back (Middle): Naryu's Wisdom, Din's Power, Farore's Courage.
Back (Bottom):Trials of Power, Wisdom and Courage await in the hero's quest to get the ultimate power, as he will comand (typo?) with a pure heart.
(I feel really nerdy be able to read that. Well anyway, This box is fantastic. I really like the simplistic style. I do agree that writing the front Logo in English would help.

Yeah, that's it. I'll put it into the description.

This is very nice. I especially love the back and how everything looks engraved into a wall. I do agree with others though, the title would be better done in English.

I'd rather not be able to read the text - without a translation, mind you - and have a sound, accurately portrayed image than have the design suffer with an english title.

You did a good job replicating the inside of the Goddess Statue, and your work with lighting and perspective is quite good. A few things, specifically the pedestal below the Goddess Crest, could be adjusted. It's relatively bright compared to the stonework surrounding it, and the floor too lacks any noticeable shadows. For the most part, these are minor issues, but it does look unfinished.

The back, however, is perfect as far as I can tell.

This needs a bump. Great Box.