[ Buy The Last Story at Amazon 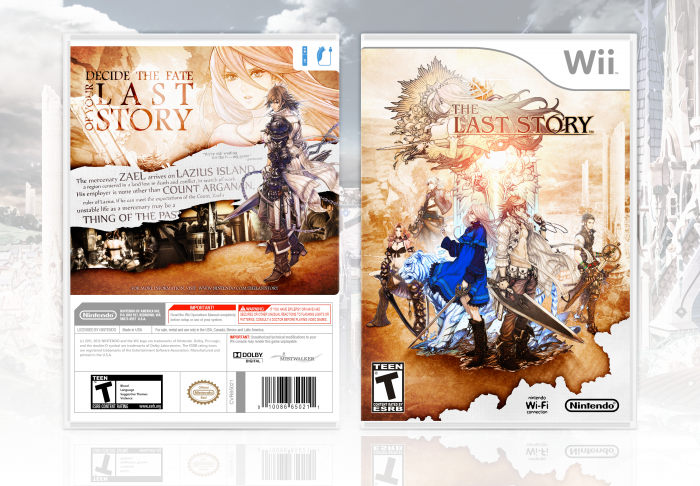 Part two of my "jaded American JRPG fans" series, Xenoblade being part one. At the time, Xenoblade didn't have a US release date, and the same is so for The Last Story now. Hopefully Nintendo of America come to their senses sooner rather than later.

Anyway, this project was sudden, in that I didn't actually have anything planned. I was simply messing around with different ideas and ended up with what you see now.

Comments and critique are always appreciated. And I do plan on submitting a printable soon, preferably once the game has been announced for US shores.

Wow this is amazing.

Nice Work I think it is author favorite time.

Did you colored the front? Very beautiful and detailed!!

Thanks, although I'm not sure I understand what you mean. Colored the front?

Yeah, I mean do you fill up colors to the main characters in the front? Because I have seen that artwork with mono tone.

Ah, okay, I understand now. Yeah, I did.

This is your best cover yet.

Wonderful job here, I very much like the colors and lighting. Obviously I have no complaints, just as great as your past submissions.

Thanks, SP24. I'd originally planned on a slightly less saturated color scheme, although in hindsight I'm glad I went with what you see now.

Thanks to everyone else, as well.

So fucking cool. I love this!

One of your best. The back text is done really well, and the front looks great.

Keeps your style while still making a great impression.

I was beginning to think nobody had noticed the quote. I felt I needed to show my frustration about the game's current state in one way or another. Thanks, deiviuxs.

More than deserved it. Congrats.

How the hell did I miss this?! I guess I'm not the sd super fan I thought I was...

I really hate when I miss amazing boxes. Good thing this got hall or I would have never seen it. :)

Huh, I haven't seen that in a while. Thanks, guys, for the continued comments and likes, I appreciate them all.

This is exactly what the official box should be like.

That is absolutely mindblowing, fantastic. Love it. What a great work you put into this! O.o

Crud. Looking around, I was hoping to be the one to attempt posting the best "The Last Story" box on the site, but that is pointless now :P great job, one of my most liked boxes from you!