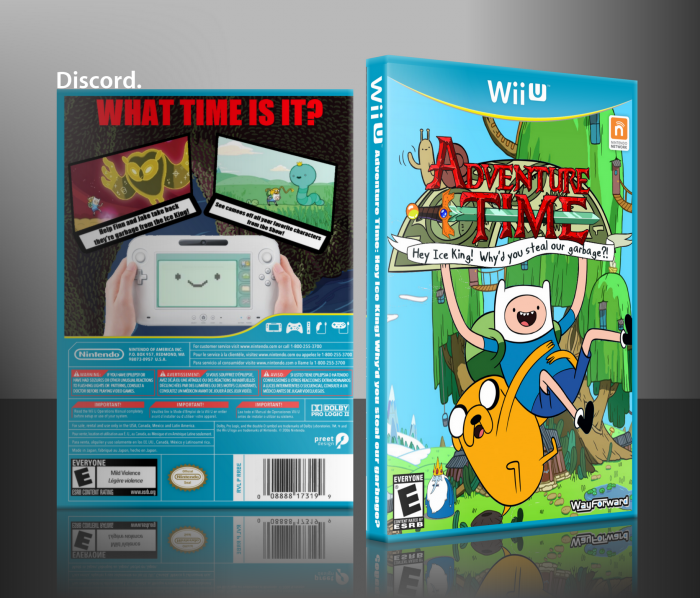 Title shortened due to limitations.

So. My first box based off a TV Show. A awesome TV Show. So I've decided to create a box art for my most anticipated game of the year, Adventure Time: Hey Ice King! Why'd you steal our Garbage?!.

But I made it on the Wii U because Wayforward are releasing some of their 3DS games on the Wii U, so if they ever announce this for the Wii U, I have a Printable file.

Wii U Template by YoshiStar
Finn and Jake render, backgrounds by Cartoon Network
Game screenshots by Wayforward
Wii U tablet by Spiderpig24

I really, really, really hope you didn't just steal the front from some website... but if it actually is you who made it yourself this is phenomenal. You should credit whoever made your resources though.

Love it, can't wait for this game!

I like it, but they've already revealed what the spines on Wii U games will look like. Seems weird to not use it.

1. I didn't steal the front. It may look familiar because I managed to cut out the Finn and Jake render out of a piece of promotional artwork.
Thanks for the kind words, and I'm gonna put credit in the description now.

It isn't bad. I think you could've done something better with the back text though.

I can't wait for this game, but the title is so weird :D I'm not sure what CartoonNetwork was thinking... :P

How about instead of leaving a pile of shit in text form, why don't you leave some constructive criticism for the user. And if I'm not mistaken, you are using Paint as well. And he is doing a way better job with it, so get the fuck off.

Can you make this for the PlayStation 2?I'm new here.

Why would it matter what system? Gaming is gaming, no matter what platform. Also, it is pretty spammy to post a box multiple times, just with a different system.

I STAYED UP ALL NIGHT ON HERE

Wow talk about a bunch of spam O's.

Not to be a grammer nazi, but you used the wrong of "they're" on the back. It should of been "their". Nice box btw