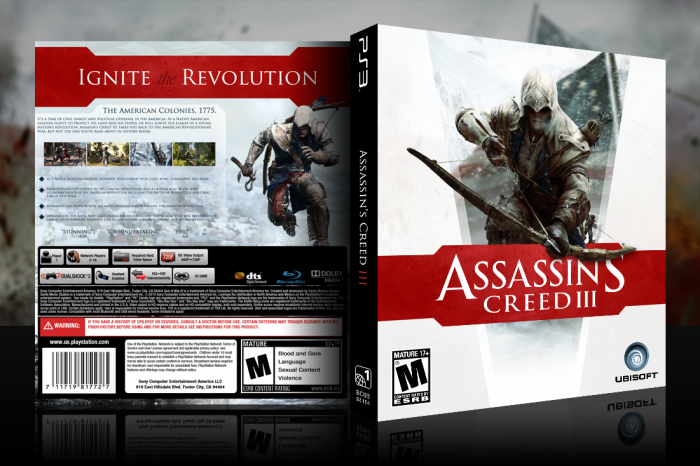 Hey guys! Long time no see, huh? So for this box I really wanted to try something a little different, and I really took a lot of inspiration from several other AC boxes on the site (namely Sp-6's Assassin's Creed box, and hesit8's AC Revelations box).

I also wanted to incorporate a bit of an animus feel into it, because they've completely cut it out of the official box for some reason. One last thing was I tried to indirectly create a color scheme of red, white, and blue, for obvious reasons.

Anyway, thanks for looking; please be sure to rate and comment and, if you like it, favorite -- much appreciated!

@Dersnap I think he meant his Revelations. I see a lot of that box too.

Really amazing! Great job - I love how the front ended up, and that back is as good as ever :)

This does look pretty good. A lot of empty space but it kinda works for this so thats fine. Connor on the front might be a little too dark though I think. The back is simple, yet effective for what you have here. Could have moved everything up a little though to space it out because the entire back looks like its getting crushed down, might be because of that empty space on the very top. Looks good enough though. And yes this box does look a lot like Hesti8's box which is a good thing and what you were going for but its also working against you a little here. You didnt really create the main design because it was taken from another box. I would say this looks good for like a trilogy set of the same design for the AC series, so all someone would need to do is make ACI like this and its golden. But overall, it looks good. Simple and nothing new design wise but very effective and a pretty good cover. Good job.

Thanks guys, it means a lot! And thank you, Deividas, you're clearly a talented designer so it means a lot that you would take the time to critique my work. ^^

Although I clearly can't address all of your issues, I was able to fix some of the issues with the back (which I agree with wholeheartedly.) I hope you like it!

The renders could use some brightening and/or saturation adjustment if only to add some more color. And the bottom portion of the front could use some action, but otherwise it's a lovely, clean piece of work. :)

Congratulations on the Hall, this really deserved it.

Oh, cool! This is pretty sweet to come home to. Thanks, guys!

That's really nice! I love the logo with the banner!!