GameCube » The Legend of Zelda: The Wind Waker Box Cover ← → 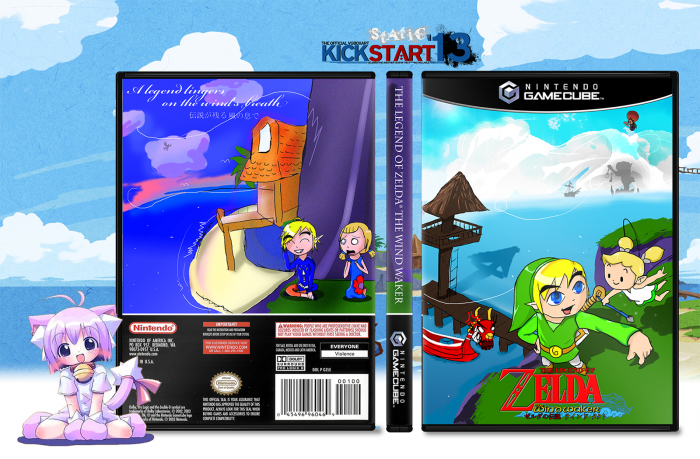 So this started out when I was thinking about Zelda's art style, and It became apparent to me that most Zelda games pretty much sport an anime-ish art style. I think that's obvious enough as it is, but OoT had a more classic anime / manga style, and Twilight Princess, had a more realistic, yet still anime-ish style. Then I started thinking about Wind Waker's design, and it's not too far off of anime. Especially If you're looking at Lucky Star, or Azumanga Daoih, with the more exaggerated, big eyed characters. So yeh, that was pretty much my inspiration for this. And I think it came out quite well. I don't quite know how well that is apparent in the actual design, but it is heavily inspired by both of the aforementioned anime art styles.

The actual design was meant to show off the adventure aspect of the game, while still maintaining that quirky feel throughout both the game, and most anime.
But mainly the adventure. Adventure... Yeah! link

The Legend of Zelda: The Wind Waker Box Cover Comments

Comment on Static's The Legend of Zelda: The Wind Waker Box Art / Cover.

It's amazing. It could use some text on the back though.

I like it. Good drawing (mainly the front part)

@Static I like it. Good drawing (mainly the front part)
Thanks, Higashi

Great work, could do with more attention

I definitely like the artstyle here, don't forget the amount of effort you put into this box. Amazing you've drawn this yourself. Definitely deserves more love.