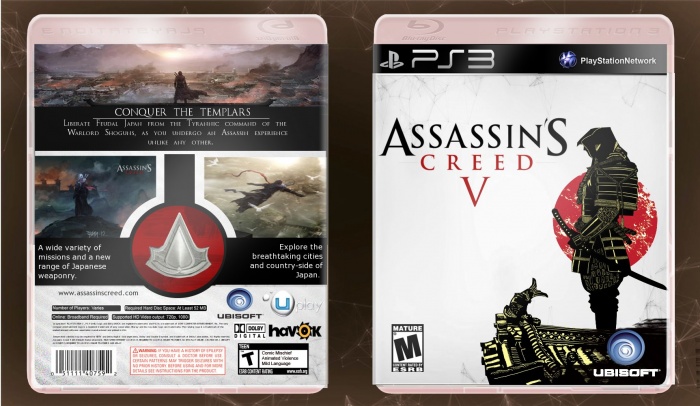 Yep, i know fans have been begging for an Assassin's Creed game in Japan so i made this! Had to draw the front so it took a long time, but im pleased with that aspect of it. However, once again not happy with the back, something i need to work on! Thanks:)

I absolutely love the front.
The back is a little bit too simple in my opinion, you should have put more effort into this.
Still a really good box art. I would love to Fav this as I'm absolutely stunned by the front, but the back is the downfall :/ sorry. Please keep up your work.

Thanks! and yep i know the back was the downfall, im still struggling the grasp the concept of the back design, But its great that you liked the front, thanks again:)

The art on the front is fantastic, and you drew it which is amazing! love that, but the general box stuff could use some work, for example I would recommend downloading a better ps3 template, it looks a bit stretched and it sticks out of the plastic case a bit as well.

I would love to see what you could do drawing the back. The front is pretty great.

I would use the most recent PS3 template though. That one is like, 5 years old.

This. The front looks great, and although you were consistent with colours, it would be amazing if you were to create a hand drawn back.

I recognize the front from here: link I'm guessing you modified the head and added the roof they're standing on?

The box looks good, but a little disconnected. Wish you bought some of the qualities from the front to the back (the illustrative quality that is).

The front is absolutely fantastic I love it, but not so much on the back and the template used. I would try a different template and put a bit more time into the whole piece :)

seen this a few times, only just realised you drew the front. fantastic!

ah what could have been! ok so if the front art is hand drawn by you then you truly are an artist!

Still waiting for this to happen.

It's coming. Next year, after AC Victory. That's my prediction anyway.

I might remake this box, now that I've improved. Looking at this now just makes me cringe eurgh.