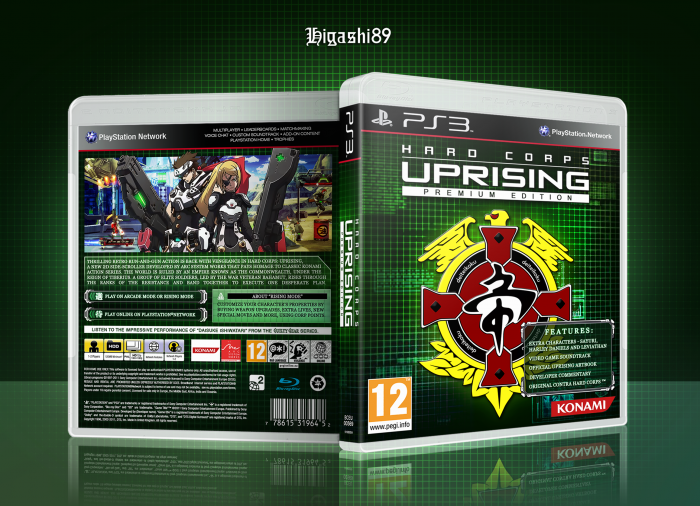 I though I was never gonna finish this box, because when I started this box it was in August or September, I don't remember for sure but it was around this time last year, and it was originally a collab but it didn't work out. So I decided to move on this project little by little and I finally achieved it.

Hard Corps: Uprising is an awesome 2D scrolling shooter, which is a prequel to the Sega Genesis title "Contra: Hard Corps" and it's a downloadable title. So I though of doing a "special edition" of this game as being the retail version of it, which I named "Premium Edition" because it sounds cooler IMO.

In case you don't know, I remade that Eagle Emblem on the front entirely, and it is the Commonwealth's logo (a.k.a. The enemy's logo). And my purpose was to mimic the Skyrim's official front cover.

Thanks to Ausman101 for the PS3's bluray case and GhostIcon for the PS3 template.

I love the style to this, and that logo is wonderfully well done

a bit too gay for me

also, that game is an asshole

but then, every box could use some more chie

I WISH this was real. I love getting the physical copies of XBLA/PSN games (like Monkey Island 1&2 or Ducktales Remastered) and I love Uprising even more. Probably my fave game of 7th gen!