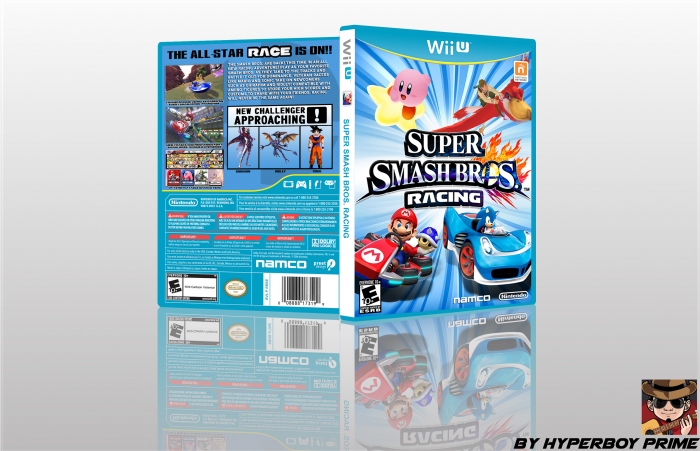 A box that was inspired by my brother! We were playing SSBB and then Mariokart and he said, "Man, I wish I could race as Solid Snake!" and that little lightbulb went off in my head! This has been the longest box art I've made because of the immense changes in the WIP forum that I received (Thanks to everyone who gave me feedback). But it's finally here! Hope you guys enjoy!

SOURCES:
Template by YoshiStar
Logo by Higashi89 (BIG thanks for that!)
Mariokart and Super Smash Bros. font by FontAddict
Nintendo Logo by Cerlum (slightly edited by me)
Images from IGN,
MachRiderz on Deviantart,
zelda.wikia.com,
smashbros.com,
epicrapbattlesofhistory.wikia.com,
and of course, Google Images

This box would've sucked without these guys :)

Well now I feel stupid. The back looks way better with the white text. The box itself is great, you did a really good job!

Thanks, But your idea did look good and all of these are just ideas to experiment with so no biggie :) and your logo drop shadow idea did make the box better

This came out really well!

I think the presentation is a bit lacking though. I don't think you need that much space around it. It makes the box tiny.

You're right, I'll update it soon

Thx, you helped too ya know!

This is your biography or introduction of Your cover?

This looks amazing, and I love the back design. Great job.