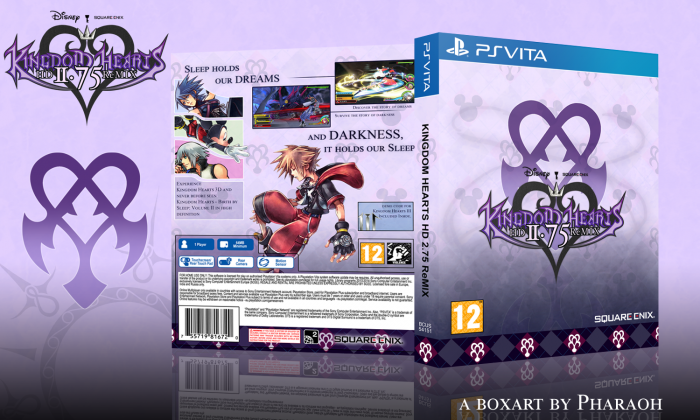 I recently got a PS Vita, and I think It's capabilities are just fantastic. Far above the 3DS and it has the same capabilities of the 3DS. So I thought, well if an HD ReMIX came out it would have to support the touch functions of the game's battle system otherwise it wouldn't work. So what better than to bring it out on here. Nomura has stated that he doesn't like leaving it out of the HD ReMIXes. He has also stated that the alluded Birth By Sleep: Volume Two, during the ending sequences of the Kingdom Hearts Birth By Sleep Final Mix Secret Episode, is a fragmented story which he would like to tell in full when he gets the chance. What better way than to put it in here.

So I made the logo. I kept it BBS style, cuz I love that format and used it to represent bothe 3D and The Realm of Darkness at the same time. I always imagined this box pink and dark like my 1.5 box, which I thought would cause me problems, because I didn't want to repeat the same design twice. But It turned out fine. I just think it's a bit of a purple overload. But who cares right?

As with the previous two boxes, on the front is the main enemy being fought in 3D, the Nightmare Dream Eater symbol. There are no renders of it around, so I had to vector it myself. Around it, I tried as best as possible to represent the corridor of darkness forming, which would represent BBS Volume Two. Trying to keep a trend like I did with the previous boxes.

I actually wanted to make this, and withhold it until I had made and finished my Dragon Age Inquisition box, but I give up. I worked hard. So i should reward myself by putting it up.

Anyhoo, This is it. There's only one box for Kingdom Hearts left, and that's III, which I have a special plan for.
PSVita template is purely custom made from scratch. Dream Eater logo made from scratch. Assets for this entire box especially the logo, crafted from scratch. Rendered out the character images. And the KH III logo numerals.

I hope you enjoy!

P.S. I know the Pegi logo is missing its bottom bit, but I kept it like a square on the previous one and since this isn't official anyway, I am going to leave it like that.

It works well with your other Kingdom Hearts box. The back is bloody great, the whole box has a lovely feeling.

"I recently got a PS Vita, and I think It's capabilities are just fantastic."
Yeah, the PS Vita is awesome. I bought mine for 70â‚¬ on eBay and I'm absolutely in love with this little thing. I have so many PS1 and PSP games now for it, it's basically a retro-machine!

Dude, my nephew gave me his, but it was kinda banged up and the fat version, so i traded it in for slim and added money, albeit Â£95 and now i cant stop loving it. I use it for my retro stuff as well. Especially my psp stuff. Inbox me your PSN ID.

Funny thing is, I used to hate the Vita and think it was dumb befire i git one. Now i see that its actually great and i feel like an idiot. Though i am glad i waited till now cuz i got a slim version.

I have the fat version, which I prefer because of the better display, but tbh, the slim version has it's preferences as well.

It's a little tech wonder and a retro treasure box. I'm in love with my Vita, played so much stuff on it (for example Rayman 1+2, Persona 4 Golden).

My super top secret PSN ID is in your inbox.

@aldimon very well. I shall proceed with caution.

Very good design. I prefer the last box you did. But this is great too

Thanks so much. Really? I think this one eclipses it, but I can see what you mean. I really love this one. Probably cuz i made all its assets and i made it work. And it feels like its a handheld title to me when i look at it.

Looked at this and thought: This site needs more VITA boxes.

Ever since i started loving the Vita, I have felt like a massive hypocrite.

This is awesome. Great job ;)

Thank you. I just realised that I made the emblem on the front too big. Its now making me itch to make it smaller, but I think i'll leave it like that.

Dude I love all your KH Box Art, god they're so fantastic! You're amazing with photoshop it looks like. But I was wondering, since KH 2.8 turned out to be the third ReMIX Game, are you gonna do a boxart for that too?