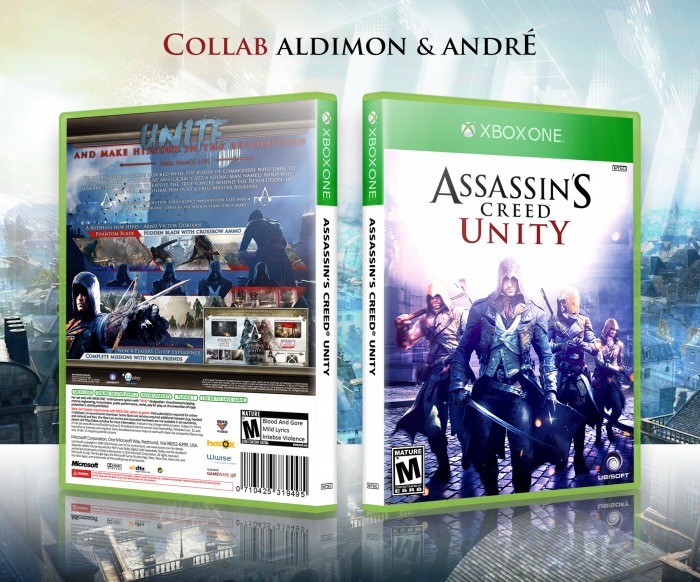 Soooo, this is my first collaboration ever on VGBoxArt by invitation of Aldimon, I'm not gonna lie, I was pretty excited since he's a very skilled designer and it was one of my favorites series ever, Assassin's Creed.

Aldimon made the front and I made the back, with a little adjustments in the end I think it worked out pretty well and I'm looking forward to work with him again ;)

Show some love for him ;D

EDIT: Credits to Shirazihaa for the AC Renders!

Hey man, it was very cool to work with you :) Your back ROCKS on so many levels! ;) Looking forward to our next collaboration :)

Sure thing! Thanks for all the tips, it wouldn't be the same without them ;) you know I just love your work!

And you know I'm a massive fan of your boxes as well. You never fail to deliver ;)

This is massively sick.
Amazing job on both parts.

Both of you made a really good job, well done guys!

Good work for the both of you

You think? That's good to know, thanks ;)

My back wouldn't be the same without the front made by Aldimon (:

Front done nice , but too much lighting above assassins ;) ,
about back I have to say I found no relation between front & back , and its some how annoying to me .
about coloring on back , it's distracting , the whole background and characters are in dark blue , but the tagline is in dark red , if I was U I would use light colors , and that text on the top of back , it's lost in background .
positive points : good structure for screenshots .
at the end , good collab ;)

Hey man, thanks for the feedback. Yeah, I kinda slightly messed up the lightning, it's a tad too strong. Looks as if the damn sun would fall onto their shoulders :P

@aldimon I was thinking about a sunny day ;)