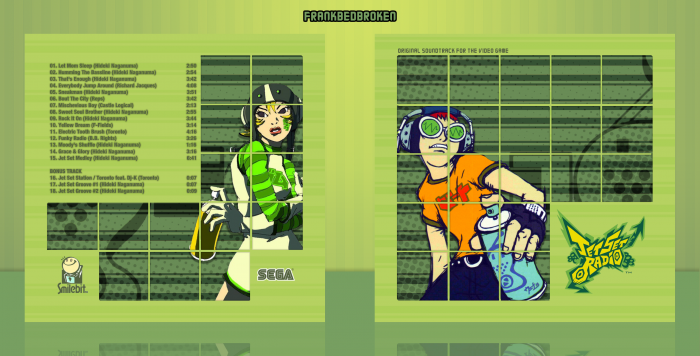 I always believed Jet Set Radio was a really fun and eclectic game with a cool and bouncy soundtrack, and I thought, "Hey, why not make a box for the soundtrack of the game?", and since I been wanting to make another music cover for a while, I decided to do it.

As always, constructive criticism is welcome, and huge thanks to TheTombRaider, lucidhalos, Pharaoh, jevangod, GameRoomProductions and Higashi89 for the help and the feedback on the forums, it's really appreciated.

Yes. This is good.

I'm so happy I caught this in the forums when I did, even if my contributions were minor. This came out awesome! Well done!

This came out awesome.

This is a cool thing to see when you wake up, huge thanks everybody! :D

Woo it got Hall of Fame! I knew this cover would, congrats Frank!

Thanks, Nathan! I actually didn't expect to see this one on the Hall, but cool. :D

I love the green grid. It's different and I would pick it up to get a better look at it if it was in the CD rack at the local music store.