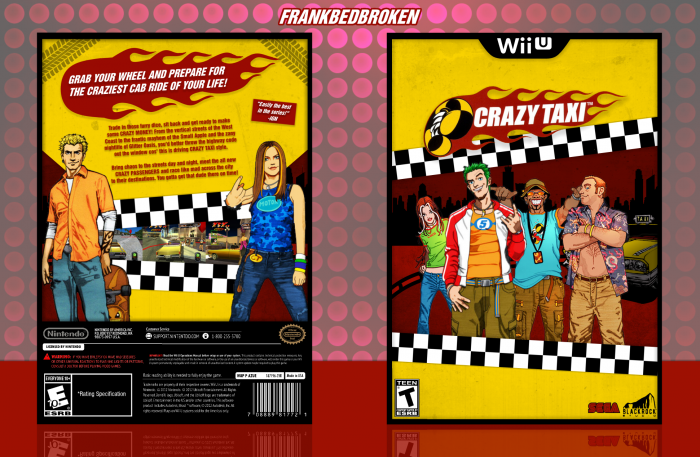 I've been having a huge lack of ideas recently, so I went with this one that was the one that I figured I might be able to do. Apparently, Black Rock Studio, the guys from Split Second, were going to make some sort of reboot to Crazy Taxi, but Disney Interactive shutdown the company, leaving that idea scrapped and the only thing left of it is a few pieces of concept art here and there, and that's about it. I liked the original game, so I said "hey, why not?" and started making this.

As always, constructive criticism is welcome and huge thanks to super-mega-hyper-sonic, Higashi89, Hades, Ultraviolet32x, tmrd, GameRoomProductions and Paper for the help and the feedback, it's really appreciated! And also, thanks to EdwardPines for the legal text, taken off of his template.

This has come together super cool man, really good job.

This was so much fun to watch develop in the WIP forums. Great job, man.

Yay the cab is there! :D

Nice box, Frank! And I noticed that Space Channel 5 nod!

Thanks, Alex! Yeah, I managed to color it, although it doesn't have any shading on it. At least it's there now. :D

nice as always. at this point it's really not a surprise that you keep churning out these high quality boxes like hot cake.

Thanks, Jakob! I still think that are not as high quality as most people believe, but well, people have different opinions, I guess. :D

This looks fantastic. I love seeing your progress. You're turning into one of my faves on VGBA.

Thanks, Lucid! I never imagined one of my favourite artists on the site liking my stuff so much! :D

"I've been having a huge lack of ideas recently" oh my GOD you make me so mad, its literally only been two weeks since you last posted hahah

But looks great man! You do have a lot of talent and you take feedback really, really well. Good job man! Fav'd and followed :)

Thanks, Tim! :D Yeah, I know, the thing is I'm accostumed to make like a box per week or some like that, and since it doesn't involve many custom stuff, like most of your boxes, it's usually easy to keep up with that schedule. :/ Again, thanks for the feedback and favs! :)

This turned out great!

Nice Man...
Your boxes have all unique styles (:

Great jump. Crazy taxi was one of my favorite games.

Very nice. I really have no complaints here.