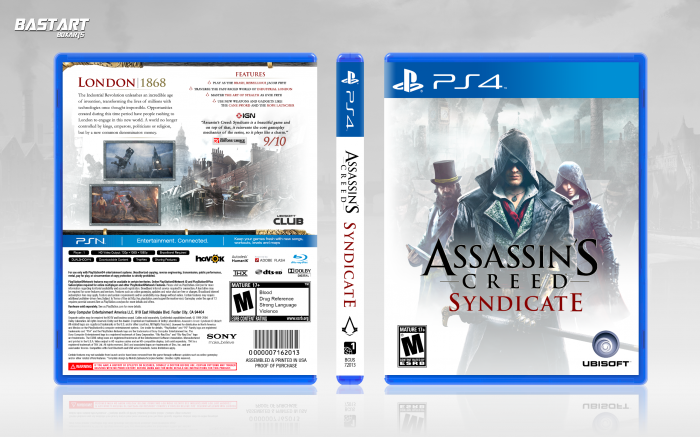 Yet another Syndicate box, I know :/ I just wanted to post this before the release.

I was going for a simple washed out look.

Credits to Scorpion Soldier for the PS4 template and eggboy'13 for the spine plastic,
also credits to amia and matingsm for the renders and logo, much appreciated.

Gotta say its totally a fresh look at the game with this box ,
there are also parts that could be better with some changes , that logo on front , could be a little smaller and no be moved down , and personally , not a fan of the font on tagline , the official Assassin font fits more than this one, other than these , its great box :")

That's fair, thanks for the comment. I've also noticed the logo is slightly off center, not bothered to fix it though.

Clean and simple. Nothing groundbreaking here.
Few little nitpicks:
a) Uplay on the front seems unnecessary. If it has to be there, maybe a tad smaller and centered?
b) 9/10 seems out of place on the back. Is it a rating? From what? For what?
c) screenshots are a bit too sharp and high on contrast. Creates distraction from the overall washed out look you were going for.
d) there's so much legal stuff on the back but I guess that's normal for PS4 cover nowadays..

Super clean.
nitpicks are that the 9/10 seems unnecessary because it's floating by itself there. It also gets a little lost coming so close to the white, I would ditch it all together. I agree with Deiviuxs on the screenshots contrasting a little much, but I think fading the screenshots would be weird, maybe try toning down the wash out just a little more on the back and bringing the white gradient on the right a little further out. I would also remove the AC logos from the screenshots. Other than that it's a great box!

Final update is up, thank you all for the constructive criticism and feedback, I really appreciate it.