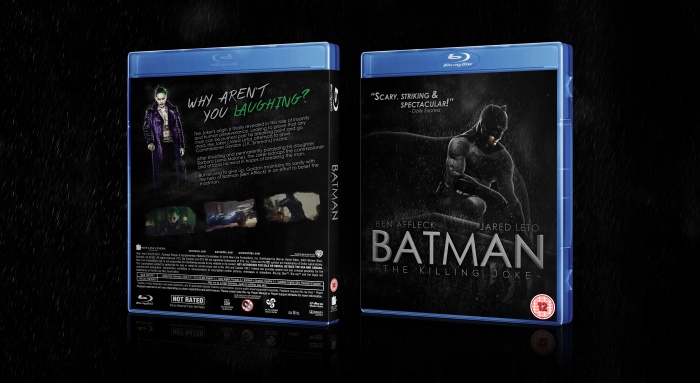 So, yet again it's been a while since I posted a box here, haha. I've kinda got Batman fever at the moment and I thought it would be fun to create a box art for The Killing Joke, as it's soon to be released in animated form.

What spurred this particular design was when I found this picture of Ben Affleck's stunt double on the set of Suicide Squad: link

I thought... hmmm I could do something with this... and then I just didn't stop haha. There's also a printable version in case you want to print a DVD case for a movie that doesn't exist! :P

Anyway, hope you guys like it. If you wanna follow what I'm up to while I'm not on here you can catch me on my YT channel: link (shameless plug)

This is awesome dude

I'm really not sure about how good will Suicide Squad will be, but I quite like this box! The only recommendation I would make is to desaturate the 18 rating on the front since it clashes a bit with the whole dark vibe of the rest of the cover. Minor nitpick aside, really nice box, and welcome back (again), Olly. :)

Ahhh, thank you so much! And yeah I thought about doing that but I guess I'm sort of a traditionalist, haha. They tend not to do that on legitimate box arts so I didn't do it for this.

I do agree though - it would look nicer with a less vibrant red. :P

Now that is a name I haven't seen for years. Nice box as well.

Hey Sarashi! Thanks so much :D

Interesting that you gave The Killing Joke a 12 rating, but this is a pretty cool box. Nice work.

Haha, that wasn't for any real reason. Killing Joke probably deserves R-rated, but knowing how Hollywood works, if this movie were to ever be released, 12 is probably what it would be. :P

Looks really great! The 12 rating is on the wrong side of the front though.

I just checked and it turns out that the 12 logo can go on either the right or the left here in the UK.

@HolyCowfartsBatman
Oh really? I didn't even know about that, and I'm from the UK xD