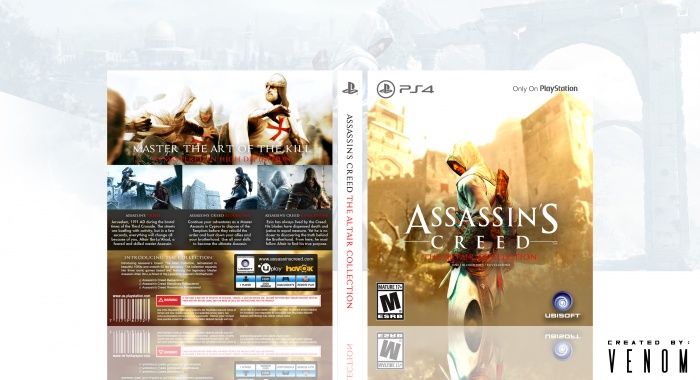 Go back to where it all began...

I utterly despise the series, but this looks quite good! Nice job! :D

For me, after 3, I started to hate the series, Black Flag and Syndicate were fun though.

Yeah thanks for the feedback y'all gave me! I was happy with the final result!

Let there be PRINTABLE!

Nice result, I only think the 'The Altair Collection' on the front and the header on the back, could use a light drop shadow/outer glow to bring it out more.

Thanks bro, the result was actually good!

When I get the time, I'll go play around with that so it is more visible!

This turned out great.

However, I do agree with Bastart about the drop shadow. A lighter one would be a nice, since right now it looks like a smudge.

I can say that I am working on it, I'll post it on my WIP soon! Thanks for the help back there btw!

Thought I had already like this... Great work V. Like other people have said the logo could stand out a but better but overall a nice design.

Thanks Vince! I updated the box, it didn't process from what it looks like. I'll try to update it again!

Wow, this is amazing.