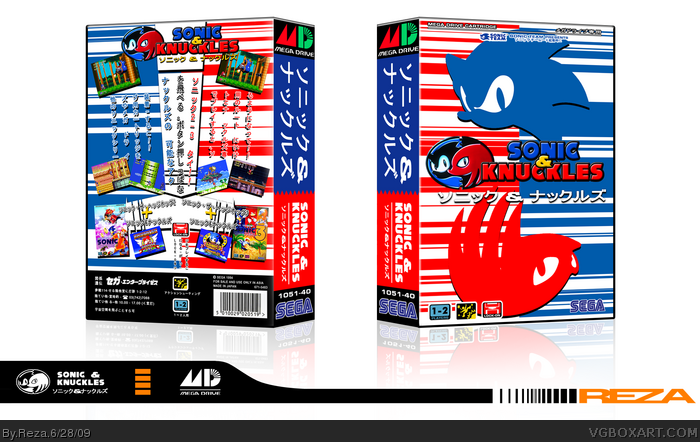 Well finally, here it is, number 4 of 4 in my Sonic Series, Sonic & Knuckles. I meant to post this on Friday, but given recent computer problems and a busy weekend, well, I guess its now.

Anyway, this time I didn't want to use any Sega artwork what-so-ever (as Sega tend re-use their old artwork AND to give msyelf a bit of a challenge), other than the key S&K logo (made the S&K title using a Sonic font). Due to the whole Lock On thing, I really wanted to make a simple, snappy, eye catching cover that simply drew ones attention straight up, then allow them to flip to the back to find out more. I added the silhouettes of Sonic and Knuckles heads for the same reason as the lines came to be, to represent the games integration with Sonic 2 & 3, as well as single player game of S&K, splitting the colors into red and blue to represent Sonic and Knuckles sides of the game.

On the back it's a different story, a bit more complicated. On the left we have Sonic's side of S&K and on the right we have Knuckles'. I chose the same main screen shot with each Sonic and Knuckles to sort of throw some mystery straight up, sort of like an enticement to read further. Along the bottom I decided to add the additional Lock On info regarding the replayed ability of Sonic 2 and 3 as Knuckles. For some reason Sega never really seemed to promote this on their Japanese boxes, but I managed to find an icon on an advertisement. Also updated the bottom template to show progressing through time.

I hope you all like it, I had many designs for this one, ranging from carving styled themes to 'drawn in the sand' themes, but I found I seemed to like this one the most.

And with that, thats the end of my Sonic series, thanks to all who followed, gave CC, favs, author favs and just generally enjoyed the series, I have likewise enjoyed creating it.

One thing I love is how you always include a description/concept alongside the cover art you create. This box really looks great and fits nicely with the other boxes in the series.

For some reason, one of the things that I love the most about your bo is that you use barely ANY English.

you remind me a hell of a lot like p0ker

which is always a good thing!

Your past retro boxes have been great, and this is no different. +fav

Hey guys, thanks for the feedback, glad you liked it. I've tried using the line trick before with a simple look but feel i haven't really gotten far with it but i think i managed to pull some of it off this time. Thanks again to all who have followed the series, its been a blast!

How did I miss this.

#4, Thats why me and him are such good mates on here :P

Hey wow! Haven't been on here for a bit and i come back to this little surprise! Thanks for the box art love everyone!!