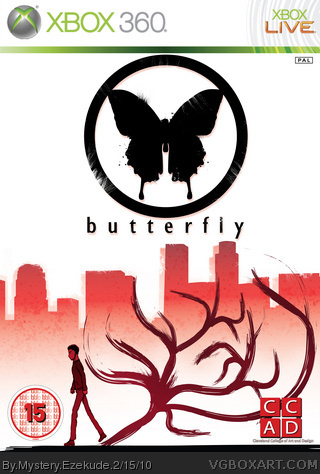 Wow...It's been about two years since I've posted my last video game cover...

Anyway, this is the final outcome of a video game cover that I created as part of my college coursework. This game is supposed to be an adventure/puzzle game that revolves around an average male citizen from New York who moves into Los Angeles. Three days after arriving in L.A, an unexplained chain of events that threaten local society begin to occur.

I created most of the coverÂ’s elements (i.e. logo, cityscape, abstract waves) using the Brush and Pen Tool in Adobe Illustrator. I added the finishing touches (i.e. grungy smudges and splatters) using custom Photoshop brushes that I created earlier. I also used images (i.e. Xbox 360 banner, age certificate) that I found using the Google search engine to create a realistic video game cover template. As for the protagonistÂ’s full-body portrait, I drew him on paper first. I wanted to make him look like a stereotypical hard-boiled Â“everymanÂ” hero. His design is mainly influenced by Max Payne as he appears in the recent film adaption. Once I finished drawing him, I scanned him into Photoshop and digitally coloured him. Finally, I placed him onto the cover, adjusted his scale and applied a dark-red gradient to him so that he blends in with the coverÂ’s colour scheme.

For this video game cover, I wanted to use a very simple colour scheme in order to give it a modern and contemporary appearance. I chose a plain white background for this cover to allow the other elements (e.g. logo, cityscape, abstract waves. etc) to stand out more. I also chose a dark-red colour for the cityscape, abstract waves and protagonist to emphasize the gameÂ’s tense and suspenseful scenario. Finally, I coloured the gameÂ’s logo and title black to make them greatly contrast with the white background. Initially, I planned to use a different colour (i.e. dark-blue and white) to add a darker atmosphere to the cover. However, I discarded this idea because I thought that it wouldnÂ’t make an impact on the audience.

I really enjoyed working on this project especially when designing the cover itself. I practised designing unofficial covers for other video games in the past. However, I only used Photoshop to create those cover and I never used Illustrator before. While working on this project, I wanted to learn the fundamentals of Illustrator and experiment with several techniques (e.g. transparencies, blends, etc.) to create stunning visuals. Surprisingly, I found using Illustrator a lot easier than I expected.

I am truly pleased with the final product. I really like how I created most of the elements used (e.g. logo, cityscape, waves, etc.) used in this cover. I am also happy with the colour scheme that I chose because I believe that it is suitable for emphasizing the gameÂ’s theme. I also like how I used custom Photoshop brushes to add a grungy texture to the logo and the cityscape. However, there are still a few things that I could have done to improve it. For example, the anatomy of the protagonistÂ’s body is not entirely accurate. I could have paid more attention to human anatomy and drawn him more carefully to fix that problem. Also, the sentence Â“Cleveland College of Art and DesignÂ” that is placed underneath the logo at the bottom-right corner is very hard to read. I could have either made the text bigger or increased the depth of the textÂ’s stroke to change that.
I believe that the most rewarding aspects of this project were learning the fundamentals of using Illustrator and improving my digital art and research skills. The biggest challenge of this project was annotating and describing the related imagery (e.g. research imagery, visualisations, experimentations, etc.)

Nonetheless, I am positive that I will become better at using vector art programs like Illustrator if I use them more often. I could try to learn some more advanced techniques to add visual interest to my future projects. I would also be interested in designing front covers for different products (e.g. film, books, etc.) and exploring different genres (e.g. action, comedy, romance, horror, etc.)