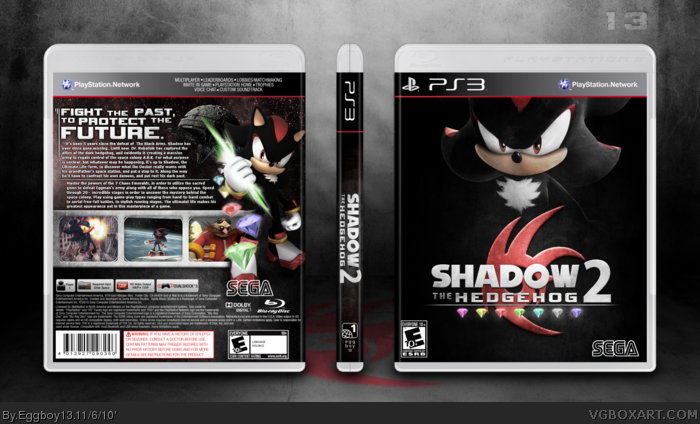 I finished this about a week ago, but one thing lead to another.. Site goes apeshitbuttfuck, yeah..

So this is just a return to, and kind of an apology to the first box I submitted when I re-joined. I'm not linking to it.. no human should have to see it.

The idea behind the gameplay was Shadow mastering the full potential of the chaos emeralds instead of shooting everything.. Ala The Force Unleashed.. With moody hedgehogs.
Shit would be awesome.

I beleive some credit is due to Jevan and ScorpionSoldier.

That's impressive. Right down to the last detail.

This is sexy!!!!!! Could you send me the link to the texture you used over shadow on the front and on the logo?

love it, great job on the back in particular! fav

This is an extremely interesting cover, firstly, I like how Shadow has a pale red color to his fur instead of being extremely saturated. Obviously the front was purposely made to look very epic, and it avoids looking simplistic. I would have to say that making the SEGA logo transparent and white is a better choice as opposed to making a red SEGA logo, because it would stand out more. I understand why you added your name to the spine to show your mark, however, I would add some initials instead, like EB13, or EGG13, spine text usually aren't so long, but then again, this is a fan made cover.

I was thinking maybe instead of having just SEGA, you could have added some more dev logos, usually games like these have SONIC TEAM in some affiliation with the development. Your description texts need to stand out more, I don't know if you use Photoshop, but you should try using Strong anti-aliasing, it makes the text look less choppy.

The far left screenshot has a slight blue tone on Shadow, I know it's not perfect, but I just thought I'd point that out. It also looks like you ignored the top specifications, I'm sure a sequel to SHTH would have matchmaking, voice chat, invite, etc.

I dunno what it is, but i really like the template.

The back is alot better than the front.
As a whole, it's good but not really that impressive.

#5, I've been in need of a long-ass comment in a while, thanks buddeh.

Thanks for your thoughts guys..

This is utter crap.

#11, Whoever the fuck uploaded it deserves death.

i dont really like the front, dont get me wrong, the back is incredible, but the front just sucks, you could do so much more with it then a black background.

#13, Don't take this the wrong way, don't think of me trying to have a big head and a bigger ego, But you really ought to imagine you can have a box interesting and crisp, subtle, gloomy, yet atractive. It doesn't always have to be a Drew Struzan poster. link
I'm not trying to put you down in anyway. I'm just suggestiong having a more open mind.

Wow, I really blew that out of proportion. Hmm? That almost had nothing to do with what you said..
Ah well, the more you know!

I like the simplistic approach you made on the front, and the back's typography and screenshots are organized very well. The attention to detail on the brushed metal texture in the front was a nice touch.

#15, Why thank you good Sirmmer. Much appriciated.

I actually faved a Hedgehog box. It is just THAT good. I must commend you a on a job very well done.

Weh hell, lookie there!
Thanks everyone!

CONGRATS ON HALL!!! very nice indeed, and like Crotale said, FAVing a Sonic box is something I haven't done, so well done!

Shadow the Hedgehog was the only Sonic game I had ever played (I only got it because of the Zelda Twilight Princess delay)
It was a lame game because of stiff control, Sonic's friends, and no open world.

This cover invokes a true next-gen do-over of Shadow HINT HINT If you made it say Rateds T on the cover the game would be better. (The 2005 game has a censored scene of shooting a young girl dead)
From what I know about Sonic in recent years, I know that the games have gotten MUCH better in 2010, so they should retry Shadow on any capable system.

This must be the best Shadow-box ever made!

wat logo font did you use

#24, SHADOW is the SonicTitle font, Hedgehog is vipnagorgialla
..And "THE" and "2" were too obscure to remember.