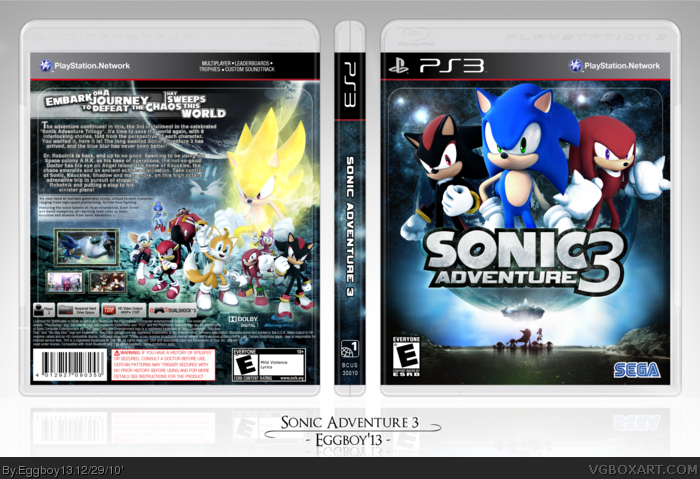 Alright, so let me start out by saying this would be all my hopes and wishes realized if ever made..
This is such a big deal to me, the idea of my 2 childhood games getting a successor, a true successor, is more than I think may ever happen. Oh, and if you think Sonic 06, or even Unleashed, could even come close to being a spiritual successor to Sonic Adventure.. you're on my list...
What would make a worthy SA3? The answer is fairly simple, simpler than many would like to think.
True, it would be delicate, but if done right, it would be great, it might even cement Sonic as more of a great game, and less of a Â“Kids like itÂ” game.

What's in a name?
The implications of another Â“adventureÂ” installment would involves several things in my mind.
1 Â– The Story, the story would have to be sensible, yet complex. It can't involve time travel, say what you like about Sonic CD, I don't really care, Sonic 06 should be the only example Sonic + Time Travel = HAIL NAW that you need. The best way to have it would be to go to space at some point. Sonic does his best work in space after all. Along with plenty of exploring plot related areas, in this case: Angel Island. The best way to sum it up is that it would be about Robotnik trying to take over the world, (No shit) and trying to utilize some ancient, or foreign power, in this case, something related to the island and the ancient echidnas and so on.
Also, no adventure feilds. Sa1's adventure feilds were great, but the massive story you'd need for another game (Bigger than Sa2) would need a fast paced, deep story, not that Sa1 didn't have this, but it was very contained, geographically.
2 Â– The game-play, the game-play in Sa1 was excellent, it showed that Sonic could in-fact translate over to 3D harmlessly, every time I hear that Sonic doesnÂ’t belong in 3D, that it just didn't work, I always say: Well have you ever played Sonic Adventure? Seriously.. anyway, besides Big, and partially kinda Amy, all the characters worked pretty well, then Sa2 came along, now it took mechanics of the first and made them just a little better, while still keeping them true to the first, although it left us with only 3 types of characters, while the first had us playing 6, how do you successfully do it again? Keep the mechanics for certain characters like Sonic, but tweak it a bit like in Sa2, Shadow would be similar to Sonic, but looser and slower, and instead of platforming, he would focus on using chaos powers, an idea that way never pursued, but should have been. (Think the force unleashed 2 without lightsabers) Knuckles could be done similar to sa2, but while he is capable of gliding and digging, he also is put in situations for combat, ala. Sonic the Werehog, but instead of lame button mashing, I'd like to see more free flow action e.g. Batman: Arkham Asylum.
3 Â– The Characters, the characters need development, and no, that doesn't mean retarded fan-fic development, but the kind of subtle development like in SA1 and 2, I miss that, no game has done it since.. also, they need the REAL Adventure actors, I would be so disappointed if they made another Adventure and DIDN'T include Ryan Drummond, sadly though, the actor for Robotnik died, yeah, which is a real shame, he was topnotch stuff, so of-course, the current Robotnik would have to remain.
4 - Remember past games. Sa1 had so many subtle refferences to older Sonic games than any other modern Sonic game. You need those, they are important. As much as you want to make a stand alone game, you really shouldn't, players like continuity!
5 - Music, Crush 40. Period. Nothing else, no exeptions. Absolutely nothing other than Crush 40.
Re-hash some orignal character themes with a new spin on them, same thing they did with Sa2.


These are just some of the necessary thing that would need to be done if Sonic Adventure 3 ever came to be.

I wasn't bothered to read all of that. Lol.

As soon as I saw this without looking at the bottom, I knew this was done by you. And that's a GOOD thing. Beautiful as always.

Looks good to me, but a bit generic.

Also, smh at your tag, you're really taking this rank thing seriously.

#4, Well not really, I can see how I'd come off like that, but I just noticed that as I was uploading. Tis a bit douchey though..

Oh God, he cares about rank, BURN HIM.

Good case, has an epic feel to the front. The back is a little crowded, or busy, and the tagline is a little confusing.

The front's layout and style would have been better suited for a game like Mass Effect 2. But it doesn't bother me, it's a really good box nonetheless. +Fav

Bitching about the ranks is the new "we hate essence"

I don't like the idea of Sonic, Shadow and Knuckles being the 3 main title characters. It makes no logical sense and seems like you only picked them because the 'poses' they are doing.

#12, I was afraid of that. No, infact it took me some time to find the renders that would work, Tails is great, yeah, but he's a sidekick of sorts.. he's a little kid, I mean, you know.. Knuckles however, I beleive makes a much more interesting character, and he almost would be what Shadow was to Sa2, he's the link to everything that's going on with the island and whatnot. Shadow is a less important version of that, he has more to do with Robotnik, and the space colony. That and I really would like to see his abilities explored, both in gameplay and a center stage story, same can prettymuch be said for Knuckles.
So yeah, I love ya Tails, but you just didn't fit.

What was the orignal tag, Rank Nine?

Anyways, box is cool...the front is quite epic, but the back's just a mess. Too much description text (you let your grand ideas for this game get in the way,) tagline typography's weird and the composition for the characters just seems out of wack. Once again, front's fantastic...the back just doesn't match.

I hate you forever, I had the SAME EXACT LAYOUT for a box I was working on just now. It doesn't really matter anyway seeing that your box is 100% better. Amazing job man, looks awesome!

I see a disturbing lack of Silver in here.

#19, Agreed. Also this is pure awesomeness.

#18, Silver is just a figment of your imagination.

Looks really cool but the description text on the back could've been justified.

i think you've summed up what everyone wants from a 3d sonic game. for that and the awesomeness of the box, big fav!

Very sexy. The 3 could have been better though.

Thank you all! :D

I think it's about damn time I author fav'd you.

I really like the front, yet the back seems a little crowded, but I just have to fav for the front...

#25, NOOO. But its your opinion and box, so if you don't want and like Silver, then that's that. Me and Ronthis are Silver fans(they also changed his voice YAY!), but like I said, its your box and opinion.

This box is so BEAST!+author fav

#31, It sounds much better but its kinda similar to the old one, but its better. And can you please tell me where you find those backgrounds? They're great.

Thank you all so much! :D

CONGRATULATIONS ON THE HALL!

I see that you want Mighty the Armadillo to come back some time on some real sonic game. But appart of it, excellent box.

like the tag its like saying "hey sega get smart and notice your fans want this game!!"

like the tag its like saying "hey sega get smart and notice your fans want this game!!"

Looks awesome! I'd buy this game.

Silver, Blaze, and Big are missing and that kinda sucks. Also, why the hell is Mighty there without the rest of the chaotix team. The others probably doesn't even know Mighty. Still awesome box though!

#12, You never know, the story could involve Tails being missing or kidnapped or something.

Also, I registered an account just to say that this box defines my life. I got all the emblems in SA2 and i think some of the 3d Sonics are a little underrated. Great work~ :D

#49, I picked the 3 because they had more impact on things, Knuckles is the guardian of the Island, Shadow is the connection to the ARK, and Sonic.. well, obviously.
Tails serves as Sonic's sidekick.

#40, Oh nothing, is just... I don't see why people cares so much to a Sonic character that appeared in 2 underrated gaes (SegaSonic Arcade and Chaotix for 32x).

#51, He's kinda the BobaFett of Sonic.
And everyone wants him to make a comeback.. Which now is actually looking to be more and more likely.

I always saw him as a "doppelganger" of Knuckles or something (the same to ray squirrel with tails) so that's probably why I never saw him as part of the cast from the Sonic series...

How do your covers get so many views?

Sorry about those numbers.. I tried doing one of those foreign wtf faces, guess vgba isn't a fan.

I don't think Sonic should be taken so seriously, but I can't really blame you, as four or five years ago I was envisioning the "perfect sonic" as the same, dark themed, game/story. I recall writing a Sonic reimagining that ended on a very serious note. It was for a comic run I wanted to do but very much like all of my projects, I never started. Only planned.

Anyway, it looks great, even if the content doesn't seem ideal. Your execution is really impressive. That cover is pretty damn beautiful.

#60, I'm starting to feel the same way, I've been playing Sonic Colors recently, I'm convinced Sonic can be light hearted and I'll still love him, in the same way I still love Don Bluth's animation, or whatever.
The main purpose with this is that Sonic Adventure 2 was very serious, and even with Sonic being lighthearted, which I'm ine with, another SA title would have to be somewhat serious.

i just love this