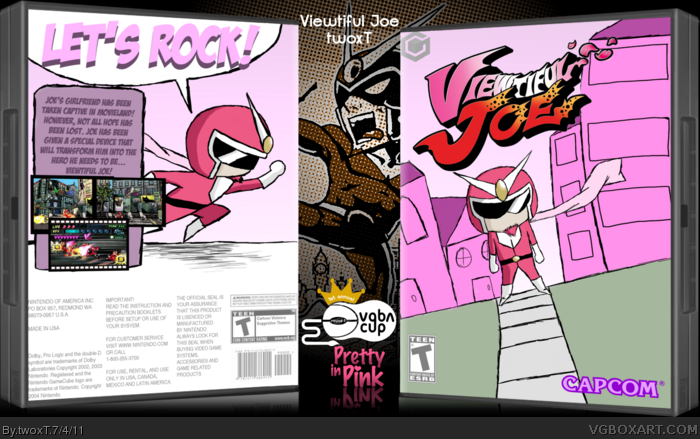 An attempt at custom art for the VGBA Cup.
It didn't turn out as expected and after seeing so many great boxes, I'm bound to be at the bottom of the leaderboards.

I really like the concept, it just wasn't executed as best as it could have been. I like the diagonal camera angle, it gives it personality. And you implemented pink into the design really well. I think the main character was very well drawn, but the backgrounds don't have the same feel, they look really rushed. The same with the back, the main character, I can see the effort in him. But everything else looks forced, pushed over to one side.

#2, thanks.
This was kind of rushed; I'll try to update it later.

It's too bad this box will undoubtedly go overlooked because of all of the other awesome boxes around.

Wow, I'm actually in love with the drawings! Really nice style, althought I still have some suggestions.

I see no actual reason why the legal info, the warning box and the rating should be light gray; you could try with their actual black and make the legal info text smaller, reasempling the real boxes' info box. Same goes to the front's rating, I think it doesn't need to be gray. The main problem I have with the front is that everything seems to be cluttered at the top, leaving the bottom almost empty; my suggestion is that you try to place everything a bit lower so the front doesn't look unbalanced, and maybe add some deatails to the floor. I think you should've tried using the official Capcom logo and (Maybe) the official GameCube template, only to try and se how it looks. On the back, it bothers me that the tagline's too big, and that there's not background behind the render (Maybe you could draw some buildings and motion-blur them, as he's running.) The screenshot at the left loooks chopped and it's not the same size as the other two, nor their borders match. The tagline is closer to the screenshots that it's close of the top border, you should center it vertically too. The back info says "This seal is your...," but there's no seal, and that way it doesn't make sense.

Btw, seems like you had problems skewing the box, as well with the reflections. See that the legal info on the back is in touch with the left border, and so does the front's GameCube logo at the top.

Great drawings, but some things need to improve.

P.S.: The little space between the two houses on the left side of the front should be of the darker shade, IMO.

If you get a chance, try working the art more: try to capture the thick comic book style lines and outlines. It would help this box immensely.

you know what this reminds me of ---> link

It looks nice.. but unfinished. I think with more work on everything, it could look really good.