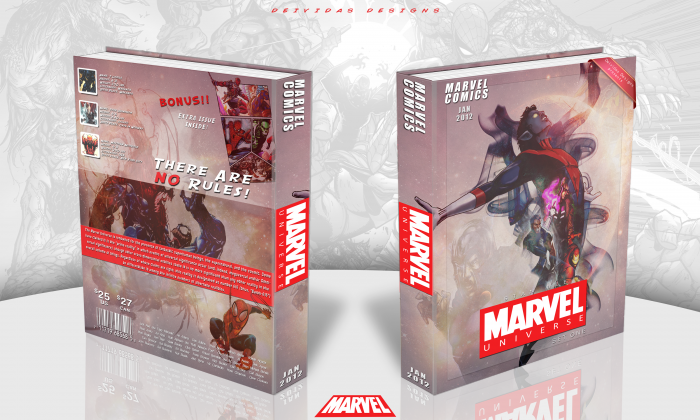 So this had originally been a cancelled box from over a month ago now. Started as a game but decided to take it to a comic book and I think that's when it really started to come together. It also helped me take a break from the good old PS3 covers which I will prob not make for a while. A lot of effort went into this box and I think that it really shows. I have been working my ass off on it for the last 2 days. using all my spare time on it. I'm extremely proud of this work and I hope you guys all like it :) Thanks for viewing and the support.

Oh and since there was no Misc. Categories I just stuck it under movies, figured it suited better than games.

Wow. Just... Wow.
This really is just fantastic. I really can't find any flaws in it, at all. It definitely shows the time you put into it.
This is totally HoF worthy.
+Fav

Really good. I love it!

I really love it. I have one complaint though: The artists used for the images on the cover are inconsistent. It just doesn't flow very well when Iron Man looks digitally airbrushed and Nightcrawler has such deep, black, line art. Overall though it's really a fantastic job.

Thank Slyder! yea I know they are all from different artist and I tried my best to blend them to look more similar, they looked REALLY different because I added a few things to them lol And I knew Nightcrawler was going to be the biggest difference between all of them

Damn...this is really nice. The back seems a bit too empty but overall package is very well made. Great job!

lol thank youuu! And I made it a bit empty on purpose. I was going through a lot of comics online because I honestly have never seen the back of a comic book and apparently it was always very minimal. I tried adding more so its not so bad :)

There's no noticeable issues as far as I can tell. Great work, man.

Very nice! Love the colors on this, great job.

You did pretty well with this! The front is pretty amazing, but I'm not so fond of the back. Still, a pretty great box.

Very nice, although I think the back's composition could be arranged slightly better.

Also, I love how books are a category now. I was only thinking this the other day.