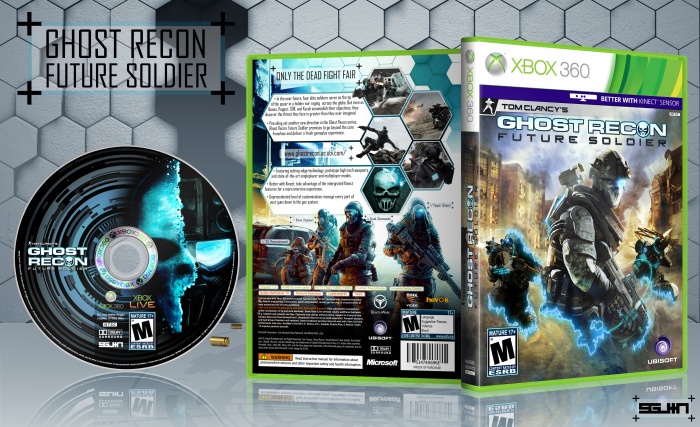 Ghost Recon sure has come a long way in 10 years, I still remember the countless hours I spent playing the original Ghost Recon on the old Xbox. Anyways, this is my entry for the contest Ghostrecon.net is hosting.

For the front of the box, I modified some old artwork for GR:FS to reflect the current look they are going for.
I added in various details such as the digital camo, the face mask design, and also included the augmented reality rings for the guns.
Since the Ghost in Future Soldier now have the ability to use tactical cloaking, I was also able to use and refine the "optical camouflage" effect from my Starcraft box in this design.
~view printable for a better look, it turned out pretty nice :D

This is brilliant. It looks insanely official.

Very nice. My only gripe is that front and back doesn't match much, there's white on the back and none on the front. However, this is still a great design, especially the screenshots.

I see what you mean.
I based the general feel of the box off of the official Ghost Recon: AW2 box, so that is the main reason why there is so much white on the back.
I did however try to tie the front and back together with the orange and cyan color scheme though.

I haven't seen you around VGBA, but this is really well done. Good job, and welcome to VGBA,

Nice job, but I'm going to have to do with Deiviuxs about the back not matching the front well. Everything else looks very nice.

The digital camo effect is probably one of my favorite aspects of the design. It's a very believable edit, and the ocean blue tone looks great against the otherwise desolate environment. It also adds a sense of freshness to what would have otherwise been a rather ordinary Future Soldier cover.