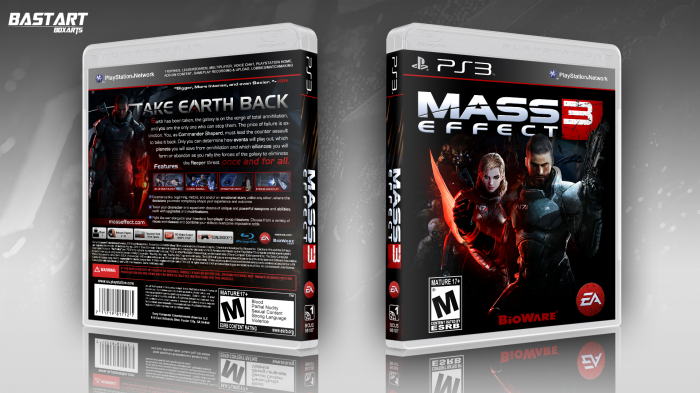 I know it's a shame, but I'm actually not that familiar to ME, mainly because I didn't played the first one (Xbox360 Exclusive) and I'm not really into this RPG stuff, I never really had any interest in the series.

Untill I discovered what the series was all about and ordered ME2 for the PS3. I didn't even played it yet, but I'm already excited to try it out :)

Well about the box, I've yet again gone for an official look, so it might look a bit generic (especially on the back layout) :/ and look a bit text heavy on the back.

Just like my Prototype 2 and DMC4 box I've chosen for a dark theme and to put the emphasis on the Omni Blade to contrast with the dark galaxy and the Reaper ships.

Credits go to Scorpion Soldier, Deiviuxs & Sens for the templates.

i love the quality

Printable looks great but few things bother me: a) characters behind Shepard's on the front are unnecessary. They are hard to see and really small; b) something about the IGN quote on the back bothers me. I think it's too big and takes away attention from the awesome tagline.

@deiviuxs Yeah, maybe the characters behind shepard were not needed, but I thought it was kinda nice to include them, I'll remove them. I'll change the size of the quote and see what happens, in the next update.

Every character behind the girl is hard to see.

Fantastic job! Absolutely gorgeous. I love how you included both main characters. It's really something your box!