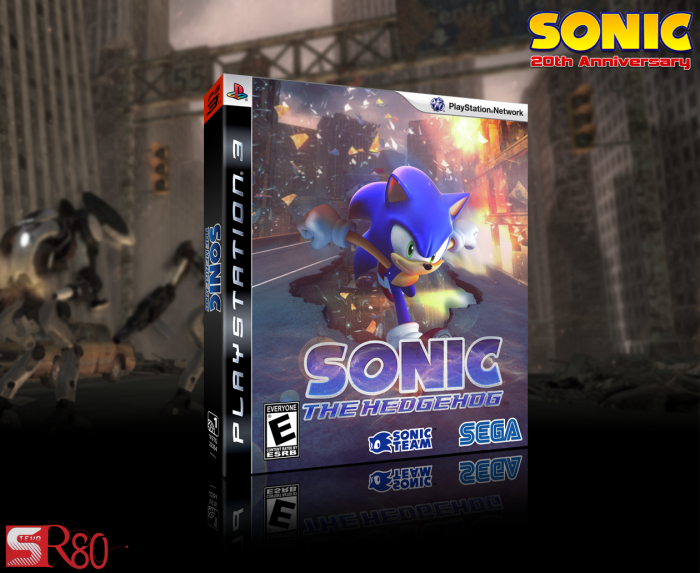 Plain and simple, did this one for the Sonic 20th Anniversary competition. Honestly, it came out a lot better than I initially expected :)

Don't really like spending too much time on the presentation, which explains the "bleh-ness" seen here.

why is the temp messed? The side part isnt the spine lol.

I feel like you really rushed this one. There was concern over the template in the WIP thread, but then you remove the bar on the front completely so it looks rather odd. A back would be nice as well.

He didn't remove the bar, he put it as the spine.

@TheNiceGuy But the bar doesn't belong on the spine.

@Throavium I know, I have ps3 games with the old template.

I agree that the presentation was rushed, but the box itself was in no way, shape, or form rushed. There was also no debate about the temp. I had no intention of changing it, therefore, no debate. I did completely forget about the side though. For some reason I thought it actually was the spine lol I'll update it soon.

May I ask you where did you get this render?

Rated M and missing the SEGA logo? I think you may want to touch this one up a bit in the next update.

@Spiderpig24
yeah if the esrb rating and sega logo was missed then it was probably rushed. looked good without the whole messed up template.

Yea come to think of it that did blow over my head and I apologize. The next update will bring some changes

Ok so the box is now updated. The side of the front is now in tact with the rest of the front, and I added a spine. The Sonic Team and Sega Logos have also been added in. Didn't want that last presentation to stick around so I wanted to update this quick. If I feel it's necessary I will make more changes. Thank you

Much better than the previous version. Any chance you will be adding a back?

Looks much better. Really awesome box, for a really awful game. : P You should think about doing a back, seems like a waste to just have the front.

Why you just did the front? The Box would look more awesome with a back IMO but even without a back I'll fav it because the front took a big effort, that's for sure.

About the template... really, I don't care if it's the old one, I know why you chose to use the old PS3 temp and I agree.