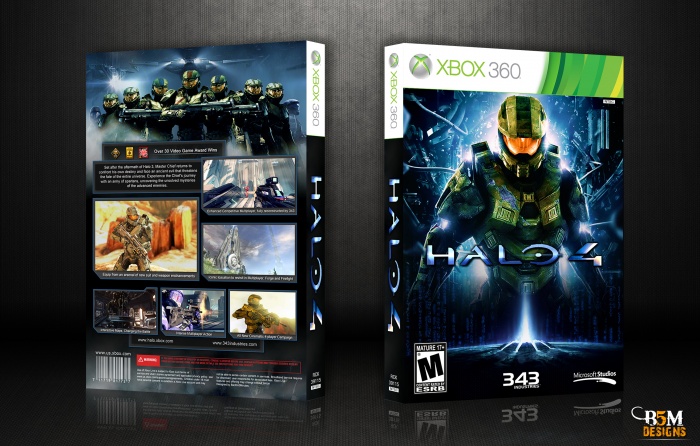 Wow, this was a big project and it took ages to complete! I thank everyone who helped on the WIP and for being patient until the box was complete.

I decided not to have a tagline on the back because it always looked to crowded when I attempted, due to the whole back already looking packed. Also i wanted the spartans and ships to be the primary focus, therefore no tagline was placed.

Although the image on the back of the spartans is from Halo Wars, I still kept them because it would be cool to have an army of them alongside Master Cheif in the campaign, especially due to no story details having been announced (they also look BADASS!).

Excellent but you still misspelled locations on the back XD

Besides the typo, you did great here. Makes me excited for the game.

Ahhh, damn.... Sorry for the typo, cant believe I did it again. Will update soon.

Nice, I love the colors.

Duuuuuuuuude I love it! Looks official.

Love it. Front looks nice and clean, and I agree, the new spartan IVs look amazing.

Personally, I prefer a tagline. (I'm so used on focusing on it, to me it looks more proffesional and official) anyway, it certainly wouldn't take away from the superb back design and colourfull front, great job.

congrats dude this is really nice