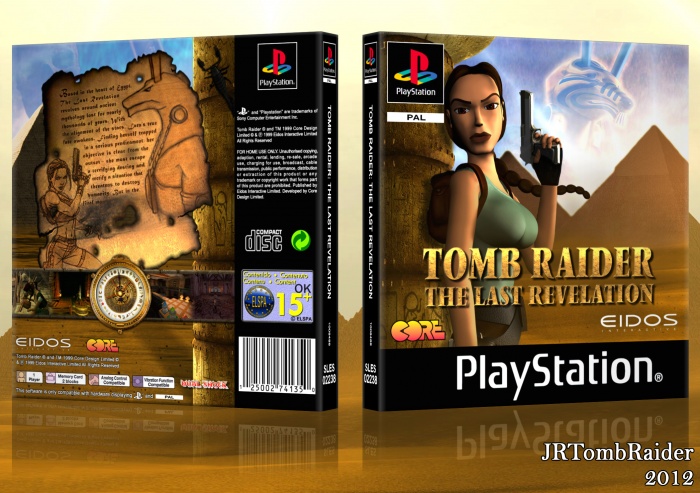 Yet another Tomb Raider box (for a competition): The Last Revelation. The most difficult one in the series, but amazing nonetheless. I think this box is the longest I've been working on. Someone else helped me with feedback and if it hadn't been for him, I would probably still be stuck with something more unappealing. He helped me in the right direction after I was about to give up.

The game has so many elements to work out and in the end I went with how I view the game, though in a slightly less dark way. I'm aware that the text on the back may be a bit hard to read but I really wanted to have it like this. The sudden end of the synopsis is like a cliffhanger, which I thought would be a cool effect. Having a sketch of Lara on the paper is something I wanted to try out for once as well. This game was perfect for that. Anyway, I just hope people will like it.

Also, I won't be making more boxes for a while, since I have exams coming up and a very busy time ahead of me. After that (if the exams go well), I plan on expanding my choice of titles for new box arts.

Thanks a lot bro :P.

You did a great job!

Wonderful. The quality of the parchment on the back could be a little better but it's still a great box.

Unfortunately, the quality of the parchment wasn't that good to be begin with, and it only got worse when I had to erase the original text that was on it. The parchment an annoying angle to work with as well (almost lay flat). I could've used a new parchment, but the sketch of Seth was so nice to have in it xD.

And to everyone who commented and fav'ed, thank you so much!