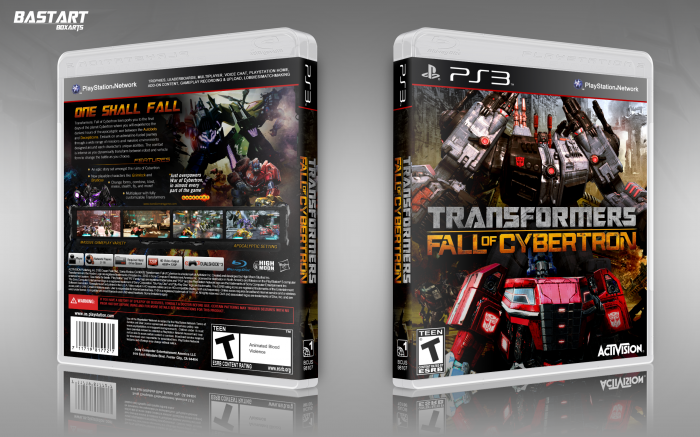 My 2nd submission for TFOC.

This time around, I focused less on the artwork and more on the characters (Optimus, Metroplex) that appear to have a big part in the game and played around with the colors and ligthning effects.

On the back I've chosen to go with a pretty basic layout which imo. kinda works, but I'll agree if I played it a bit on the safe side ;) The screenshots on the back are in-game (to bad the only decent in-game screens I could find, where the ones from the escelation mode of FOC, I'd rather had some more variety between those, it's not really a big deal for me though)

b.t.w. I absolutely can't wait to get my hands on it! I loved the first one (especially the escelation mode) The campaign was dissapointing imo. I just hope that part works out much better in FOC.

Anyone else looking forward to this game or maybe enjoyed the first one?

This is Really awesome .

And finally show your self Optimus Prime :)
Very cool man, I love it!

I really appreciate the feedback guys ;)

- I made the 'ESRB T rating' and 'Activision' logo's smaller on the front
- Added 'Grimlock' T-Rex in the background, right behind Optimus
- Adjusted the lightning in the background, at the right top corner of the front
- Added 'Bruticus' artwork to the background on the back, 'Megatron' to the middle left side and 'Optimus' with fallen 'Bumblebee' to right side just above the screenshots
- Added a made-up 'Gamestop' quote to the back of the box
- Replaced the 'High Moon Studios' and 'Hasbro' with sharper logo's on the back

Proffffffffesional(with many fs to show that my jaw dropped)

Thanks guys, really appreciate the feedback :)