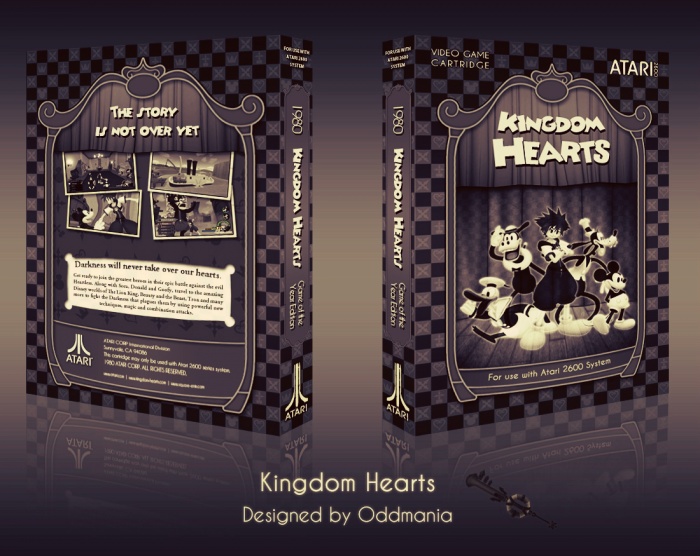 This box is based on the world of "Timeless River" in Kingdom Hearts II (PS2). This particular world is itself based on old Disney cartoons, like Steamboat Willie. Everything is in black and white and looks retro in this world, it's very amusing. It's such an outstanding level, so well executed, that I decided to make a Timeless River-inspired cover, in black and white, on an oldie console!

I wasn't exactly "proficient" with 3D boxes (everything gets so jagged, messed up when it gets to working on perspective) but I don't think it looks too bad. The reflection is plain off, though.
As for the title font, I chose the (pretty much) same font as the one used for Timeless River title in the game (cartoon, slanting letters, very close to one another, with clear black shades). The curtains are also part of the original game (on the world title, you can see curtains open when the name of the world shows up), that's why I added them. Hope you'll like it!

This is a great box,man. I love how you incorporated "Timeless River" into the theme of it! Hope this gets the attention it deserves, as it is a Kingdom Hearts box. Nice + fav.

Glad to see you back, and this box is nearly flawless. The only thing I dislike is the background behind the logos on the spine. Maybe you add a thin white line as a border to the shape, but other than that this is outstanding.

Thanks! :) You mean the edge, on the corner? Yes I tried to add a slight (barely visible) line to make some kind of edge, but it hardly shows up at all! I'll try adding a line (unless you're talking about the "frame" , with '1980 Kingdom Haerts GOTYE' written on it?)

@Oddmania Derp, now that I look at it again in full view there is already a border to the shape. Sorry about that :)

This is an absolutely wonderful idea, and executed perfectly.

Thank you guys, I'm very happy to see some of you still remember me! I didn't expect that at all, that's very kind of you.

This is fucking awesome.

You know you've pulled off a retro box when I actually want to play the game on the Atari. Great work!

Incredible! I really like the theme going on here.

Thanks a bunch, guys!

What a great idea and you executed it so well!

Kingdom Hearts is a goldmine of creativity in design, and I'm glad you've realized that and tried something out of the ordinary. Great work.

Thank you so much! Kingdom Hearts is clearly a source of inspiration for a lot of gamers!

A black and white only box? We don't see that very often. Pretty nicely done. Nothing else to say :)

This is really well made. I really love the early cartoon feel.

I am extremely happy this reached the Hall.

Thanks! Looks like you've been following my work since the very start, that's kind of you! :) I've just logged in, and seen 10 notifications and my box on the main page of the site. Geez, that's awesome!

Ah, feels good when people know what you did, doesn't it?

It sure is encouraging!

You are a true artist! I love this cover!