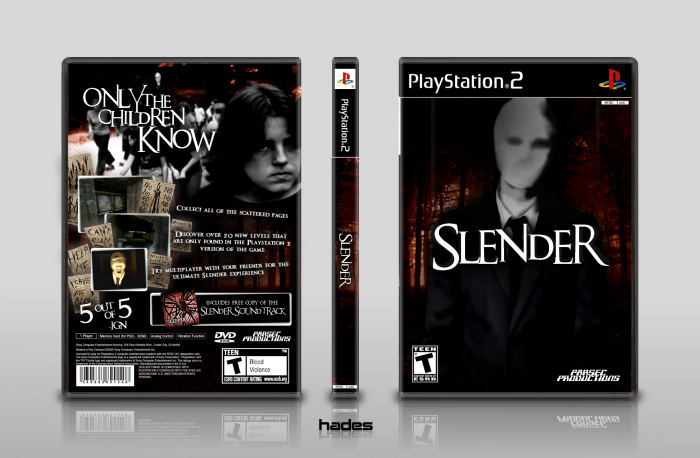 Lemme take you back to the old days of Vgba where people had their own ideas and we had a site that worked all the time. I present to you:
Slender PS2.
If only slenderman was invented a little sooner, we would be playing actual horror games instead of Cod zombies right now. I worked real hard on this, so I would appreciate feedback because I would like to improve this.
Credit to Martiniii for the temp. everything else by me pretty much.

Love the back - nice consistent design.

Thanks! This means a lot coming from you.

Love that back. This is not bad at all. Hm. I would love it ten times more if the face up front wasn't so choppy. It's great nonetheless.

That was one thing I forgot to do was smooth out the face. I'll update it tommorow, it's getting late here in Canada.

This is a fantastic design. Simply Fantastic.

Also the day CoD zombies is marketed as a survival horror game is the day I kill myself.

I have to agree on this. It reminds me the old days of vgba. The site had great artists with great ideas which I learnt from.

Slender Man was actually "created" about half a year after WaW, the first game with Nazi Zombies. It only really got into the limelight with Parsec's Slender, which was only made to appease existing fans. Bit of trivia there.

The box is good, but the back picture is a little blurry for me and the Slendy render is a bit choppy.

Awesome box art, even with the typos

Coming from the guy who wrote "Damn" as "Dawn"

@Static I just saw "expierience" at the back

yeah I commit typos all the time, but I think it's good sometimes for people to actually realize their little mistakes

@Higashi89 ok given, that one is misspelled but the way you said it it sounded like there is a plethora of typos.
And I know that English isn't your first language I'm just yanking your chain.

Nice Cover Considering I Play Slender and Still Haven't Beat It Except For Barrels Neither Have I Yet Beat Slender's Woods and Now I'm Waiting For Slender: the Arrival

This is amazing, faved it :)

I'm sorry but slenderman's facial render on the front is too choppy.

WHERE DID THE BOX GO?
D:

Reed disabled posting and updating until the switch is done.

Re-faving just to get it shown again.

Looking back I don't really liek the resemblance of an actual face on Slendy (Looks like any old guy bip-boppin around in a mask).
He's not supposed to have any type of eyes or anything to do with facial proportions
However that's just nitpicking. It's still a splendid design.

2 things: it should be mature not teen plus ign does games out of 10 not out of 5

2 things: it should be mature not teen plus ign does games out of 10 not out of 5

Keep up the good work!

Wow two years later and it's my second hof! Thanks guys!