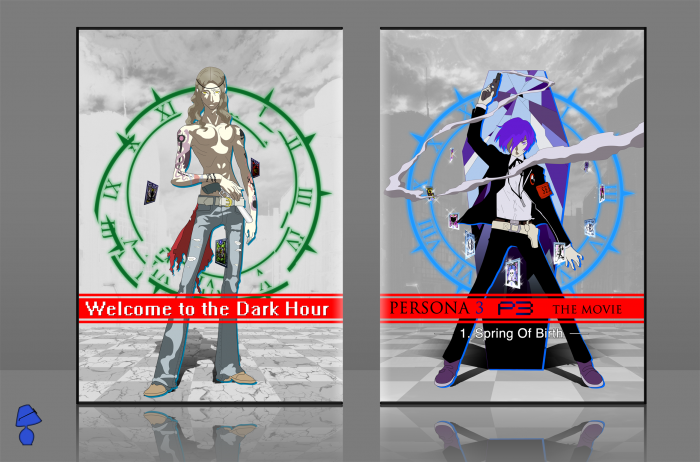 Damn, you've no idea how demoralising it was to scale this down so much from it's original size because my computer can't save a damn PNG file that big. Eugh.

Anyway, description: This was made using the pen tool in photoshop by tracing official art and the official render of Revolver Jesus. The clock was made from observation (because I had to do some of my own work no?) and most of the cards made by this dude: link

The general idea was to have as little text as possible. The art tells the story, not the text. I think I succeeded. The back is meant to be a twisted version of the front, but you knew that.

Takaya has no nipples.

It's pretty neat, lov- fuck it.

It's only problem is that the front's font doesn't work too well with the rest of the box.

The rest is great.

Which one? I used the Trajan Pro used in the first trailer, and the standard Helvetica used everywhere. I could update easy enough though.

This is pretty cool. I like how Takaya one came out more than the one with the protagonist.

For whatever reason, it seems all of the best new boxes on the site are always Persona boxes now.

As a die-hard Persona fan, I am perfectly okay with this. Nicely done.

Persona really gets my creative juices going. There's so much potential in it and not many people have made boxes for the series, so I pretty much have free reign to go nuts and post all my ideas. Thanks for liking it.

Who's excited for this movie? I AM. Awesome cover!