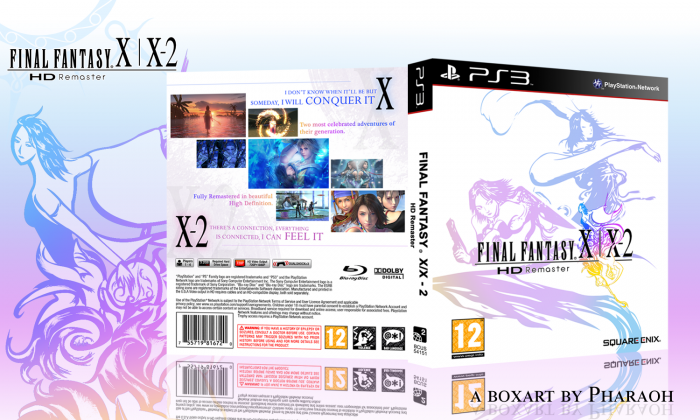 This box has given me hell. I initially intended to have it released on the day the game was released, but my earlier designs were inadequate and had alot of room for improvement. This popped into my head as i was drawing a sketch and I decided to make a special remaster logo in honor of the game. The idea was to make something similar to the Yoshitaka Amano logo's which parts of can be seen on the front. I love his work so much that I needed to make this in his classic style. It was not easy. i sketched the drawing then scanned it and threw it all into photoshop and it underwent weeks of editing. Then I had to take it down and retouch it to create better flow. The image is of Yuna summoning on water, while Tidus is coming out of it and his Brotherhood sword is providing the water she's dancing on. It's a reference to the ending of the game and the entire concept. Once I finished it, i decided to have it flow through portions of the text as I had seen many FF logos do, such as FFXIII-2 and V and others. That was probably one of the funnest bits for me.
And that's just the logo.
Which was strangely the easiest part. Whenever it comes to layout I have a lot of trouble, especially with FF boxes. I wanted to use The Amano artworks as main artworks seeing as I wanted to focus on the logo. This kinda proved difficult and left me with creativity blocks such as I have never known the likes of. But I got loads of help and advice from all kinds of people in my WIP thread from the tiny little sketch all the way to this. I owe and dedicate this box to them, because without them, This box would never have turned out to be what it is today. But that's pretty much it. Thank you all. Please enjoy!
By the way, if anyone wants to have a look at what the logo looks like up close they can look to the left of the box in the presentation for part of it, in my resources, where I will post it soon or in my WIP here: link

Oh and to any viewer...Is there a problem viewing it fullscreen? because I seem to be having trouble doing so...

Yes I can't view it in full as well, maybe you should update it

@rob2197 Ill post a link to a tinypic page or something. But idk if this will work...I'll also try to update it, but its not just my boxes, I can't view other ones.

@rob2197 Ahh, i figured out the problem. There was something wrong with all the links attached to the title "Final FantasyX/X-2 HD Remaster", so I just changed the title. You should be able to view it in full now.

Looks great, this has come out really well and I'm pleased you managed to finish it

Thanks alot man. This box didn't want to let me win, but i finally finished it.

I have a problem with the download. If I try to download it, I get a file with 0 MB :(
Is there something wrong with the file? Or why does this happen?
Thanks for the answer...