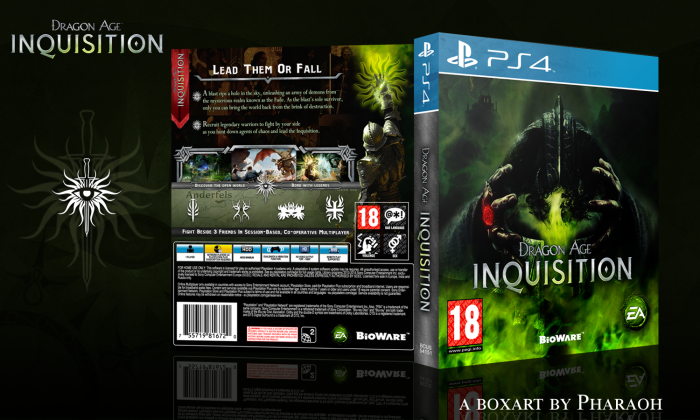 I have been trying to make this box for some time now and I have been arriving at creative blocks, left and right. It is similar to what I originally imagined, but far better. I really like this box. Almost as much as I love the game itself.

I took the helmet render that's all over the internet and I merged it with the official boxart, because I believed that it would look good as a helmet. I think it looks good. It's not the best, but hey, it's imagination that counts right? The back took me forever, and I was hating it until i changed it's layout. I love it now. I ripped off as many materials as I could from the site and from Dragon age Keep. I also nearly forgot to slap on the company logos on the box.
So the dragon render and helmet was rendered entirely by me. The smoke on the front is just some smoke i found on the net. The image of the inquisitor on the back was rendered by someone called ashish913.

As always, thanks for the help in the WIP forums.

Really nice, dude! I love the handling of colors and all the elements on the box really work well with each other! Great job. :D

Many thanks. The freaking back took ages. Im just glad i arrived at a good layout.