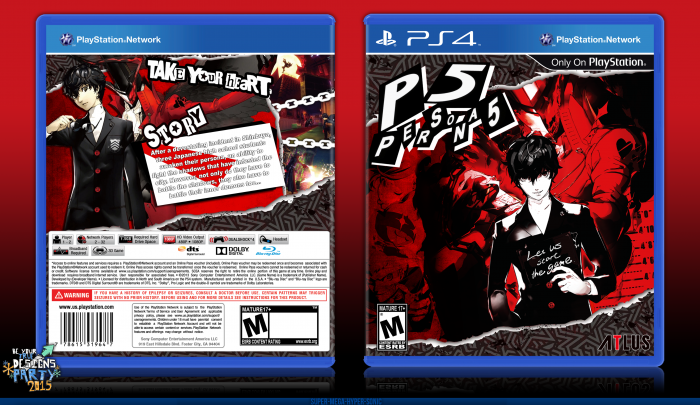 I guess I'm kicking this shit show off.

This is my entry for the Be Your True Designs event and I had a lot of fun making it. I'm super hyped for Persona 5 to come out, seeing as Persona 4 Golden is probably my favourite game, so I just had to make something, especially after that trailer. Hopefully I didn't do too badly. I'm still not *super* happy with the way the text came out on the back but after playing around with it, I can't seem to get anything better. I may update it later. Also, this is the first time I have uploaded more than one box in a year since 2012, so there's that.

Huge thank you to the people over in the BYTD Group forums, everyone has been a huge help in the creation of this box. Special shout out to Agent Lampshade, who especially helped me with resources and probably gave me the most detailed feedback.

Thanks for viewing and criticism is welcome.

I like this a lot, this is definitely something that would have me wanting to play it, if I saw it in a store. Really cool job, Ryan! :D

Great job Ryan! I'm not a fan of that red thing on the Story box but apart of that it's all into place!

u luv it bby