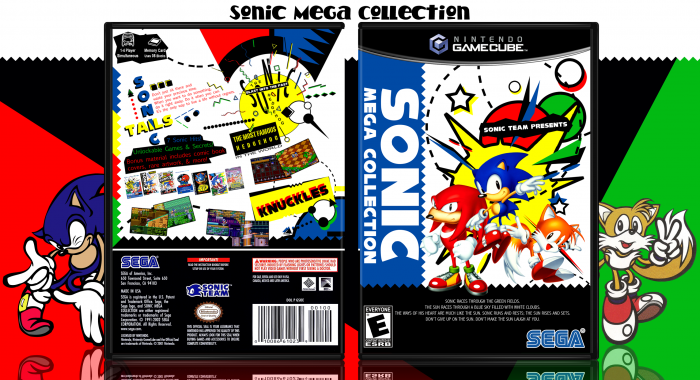 I'm back again with another box, everybody! It took a while to make, as I thought up an idea of having the similar design motifs from the Japanese classic Sonic box covers (i.e. Sonic Mega Drive games and Sonic Jam). I even replicated much of the designs (including the zany Sonic the Hedgehog art you see on the back) from scratch as a challenge.
So once again, special thanks to beardedwalrus for his GCN cover template!
And special thanks also goes to qwerty334 for his GCN plastic case template!
And even some more special thanks to the people at the Sonic Scanf fansite for the renders of Sonic artwork!
Oh, and special-special thanks to Sonic Retro for their screenshots and their high-resolution box arts used for references!
All characters are owned by Sega.

I really like the old-school vibe this box has. Good job, pal! :D

You nailed it son!

I appreciate it, Higashi!

I was having a similar idea to yours but with the a wii u box. I was going to upload it but since yours looks better I don't feel like it anymore. Maybe later.

Now I feel all sad that all my work went into nothing since it might be called a rip off.

@SonixDaName99 Uh, not really. Just because it has a similar style to this one, doesn't mean it's going to be a ripoff. I mean, they were both inspired by the old Sonic official covers.

@SonixDaName99 I would say finish yours. No one is going to say that you stole it or anything.

@FrankBedbroken Okay didn't think of it that way. Thank you for the input. Its just that I am new to this site.

@Eggboy'13 Okay then I will do it. Thank you for your input as well.

I wouldn't consider your boxart a rip-off, Sonix. Don't let your hard work go to waste!

I really like the way the front is framed up, between the GC border and the bottom part. Maybe a little busy for me, but I see where you were aiming and I would say you hit the mark. I dig it.

Hey, Eggboy! Yeah it was hard trying to not make the boxart look too frenetic. I had some more stuff for it, but I omitted them, and I felt it was probably for the better.