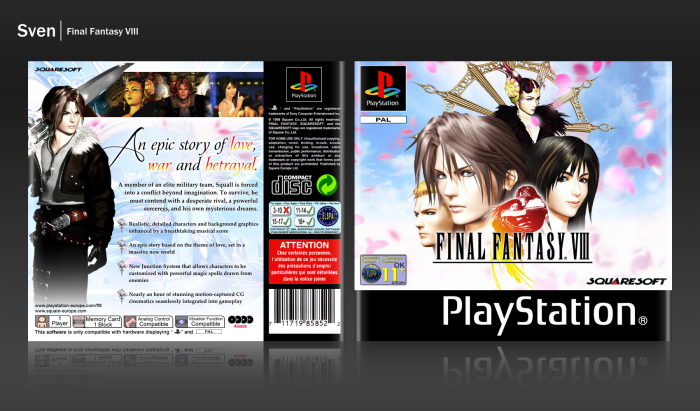 I played through this game recently and enjoyed it a great deal - in spite of the convoluted and, at times, rather ridiculous plot, hah.

Anyway, for the design, I was quite inspired by Gunslinger's epic 2008 cover for this game. Check that ish out: link

The shine effect on the PS template was taken directly from XCore's MGS cover: link - it just looked too cool to resist, hope you don't mind, dude! Lemme know!

This box looks cool, well done!
And it's never too late to discover this series ;)

Thanks! Yeah - VII is downloading as we speak :)

A confession: FFVIII is actually my favourite in the series. Sure the story was pretty wack, but I enjoyed it enough not to sweat the inconsistencies. In terms of atmosphere, it's only barely beat by FFVII and the music is even better.

I loved this game and its insane plot