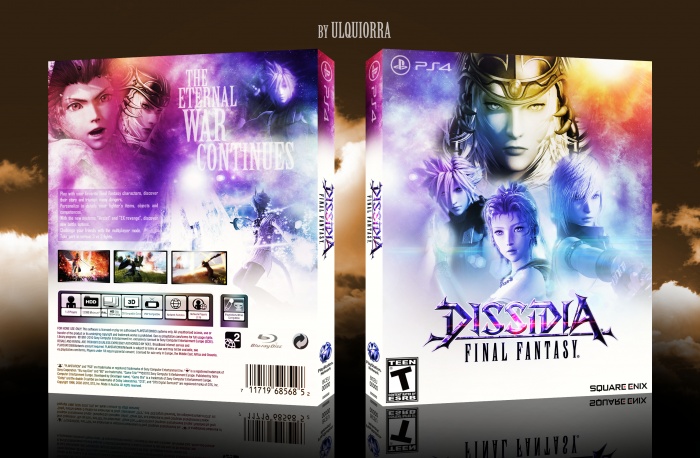 I turned fucking crazy when square enix announced that the arcade version of the next Dissidia will be on ps4 too (after all, I love crossovers AND Final Fantasy). But at this time, there’s little to no resource about this game (I hope that the E3 will brought some) so I mostly did this box with screenshots (BTW, I added the logo in the resources).
For the PS4 template, I used elements from link and link .
As usual, like or hate and don’t hesitate to leave criticisms.

It's very colorful. I really, really like this! Nice job, dude! :D

Thanks a lot dude! :D

I love this colour so much great job

The text can be a little difficult to read in some places on the back, but nonetheless this is still beautiful. Fantastic job!

Thanks! I'll work on an update, so I'll try to make the text easyer to read ;)

I love it, this looks awesome. The colour palette and washed out feel really works well, great job!

What kills me is the blending on the front... it's not as good as it could be. Nice colours and everything tho

Can you tell me if the problem come from the arrengement, from the colors or from the characters'edge (or something else) so I could fix it?

Updated!
I corrected the character's edge on the front and added more purple on Terra and Cloud.
I also tried to make the text on the back easier to read.