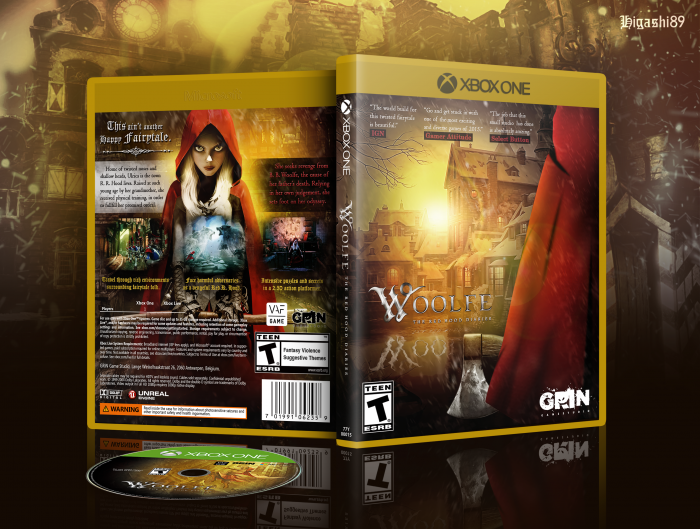 This is Woolfe, a game released not too long ago, and it's a great game. A bit broken gameplay-wise, but still great regardless. It's available on Steam for now, it'll be available for Xbox One and PS4 later this year, probably during the fall.

I wanted to focus on the yellow palette, and on bits of black and essencially red, since this is a "RED" Riding Hood game, after all. I made the render on the front using the pen tool and white & black brushes, making the lighting.

Nice. Too much yellow in the background kinda blends with the box, doh. Unless that's what you've been aiming for. Still a fav.

I wanted it to blend, yes, but not too much.

Wow, great design. I love the back

This is really nice. I really like the yellow. The only complaint I have is, that the "F" and "E" in Woolfe gets kind of lost, as does the text under it due to the size. Of course, at full size things are much more legible.

Really great job with the render on the front, btw. :)

Gr8 job love the customised template! in not full view the the title is kinda hard to read but still nice

I think the yellow blends too much but I get that you were going for it so I'll let that slide.