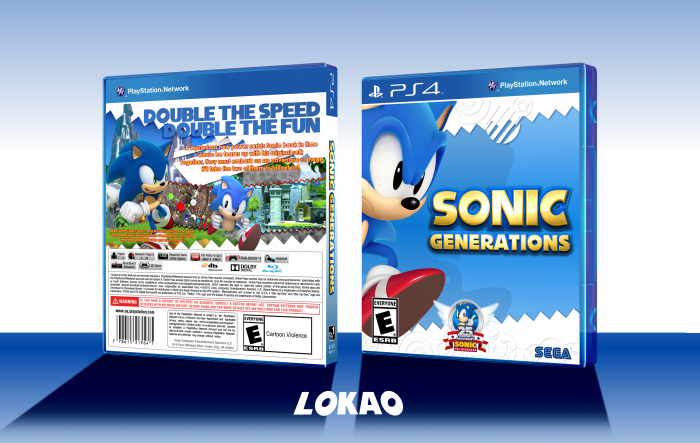 So I had this box lying around my projects folder and I already had almost finished it but I never actually did so.

The front isn't that complex but I found that it looks better like that, so... that's how it ended up, I guess?

It's pretty good but I think the front is kinda basic. Maybe add silhoettes or outlines of the sonic characters in the blu, set them with an overlay effect. Also besides the tagline the rest of the text doesn't match the box. Maybe instead of orange and red make it white with a blue stroke? its not bad tho :)

The front is something I was confused with and had no idea on what to do but I managed to do that and it looked good. I feel like if I add anything else there it would make it look off and/or busy, but I don't really know.

Regarding the text on the back, I went with that because it's supposed to be yellow-ish (?), like the logo is yellow and blue.
...I don't think I explained that very well, but basically I made it that way because I feel there's way too much blue and matching the logo was a good idea.

Sorry for the wall of text and thanks for the feedback!

I think not bad, I like are the renders and font of Double The Speed Double The Fun, but honestly it takes more work on the front. I think with more effects would be much better. As a nice job :)

Well, to be honest I kind of feel that adding anything to the front would make it look kind of busy, and I don't think that would be a good idea...
I feel like it looks better this way, but who knows.
Thanks for the feedback!

Damn!!!! Loving this, it's sooooooo good. Best sonic cover I have ever seen.