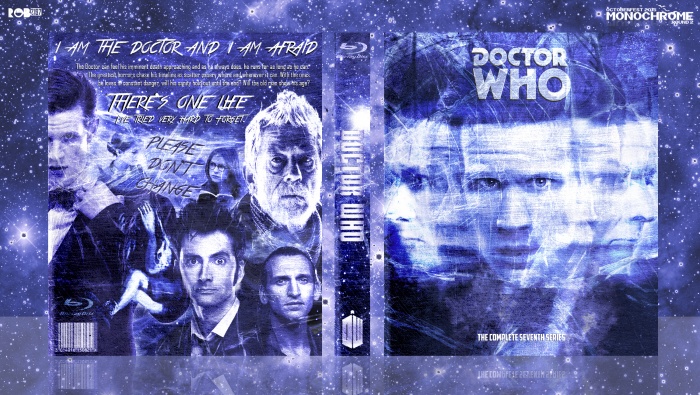 I walked away from the last Great Time War. I marked the passing of the Time Lords. I saw the birth of the universe and I watched as time ran out, moment by moment, until nothing remained. No time. No space. Just me. I walked in universes where the laws of physics were devised by the mind of a mad man. I've watched universes freeze and creations burn. I've seen things you wouldn't believe. I have lost things you will never understand. And I know things. Secrets that must never be told. Knowledge that must never be spoken. Knowledge that will make parasite gods blaze. So come on, then. Take it! Take it all, baby! Have it! You have it all!

Looks great man, I love how it looks like the doctor shifting through time and space. I think the background is a bit strong and might be taking away some of the impact of the actual case design though.

Thanks a lot man, I'll update to make the background less bold.

I think it looks pretty cool, I'm not 100% sure of the use of the True lies font as the tagline but besides from that i think this looks pretty damn cool.

I can see what you mean really, I was trying to hold a theme closer to the darker and more horror style of the episodes, but it can seem a little out of place.

I can't praise that show enough! I miss Matt Smith, though :/ Fantastic cover!

Thanks for your comments everyone.