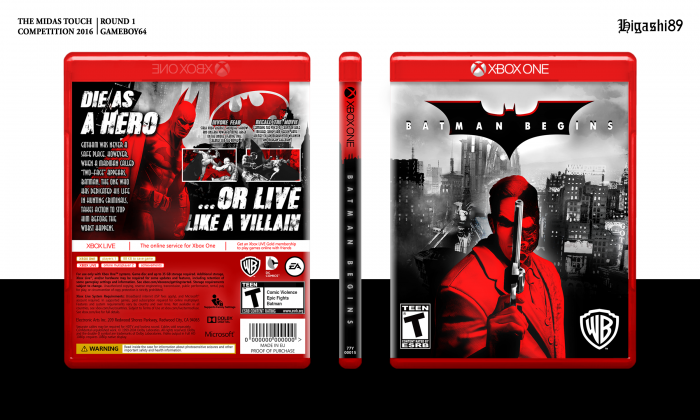 This is the first time I'm participating on VGBA's Midas Touch Competition. The concept is for you to remake an outdated box art from another designer, while maintaining it's original "essence". And while you're at it, this task was also given by another designer, so you end doing a competition to see who designer does the best remake.

This is Round 1. It was given to me to remake the box art "Batman Begins: The Game" originally made by the designer GameBoy64: link. And the designer I'm competiting with this round is FrankBedBroken: link. His version can be seen here: link.

I kept most of GameBoy64's original layout and color palette. I decided to use the Xbox 360 & One hybrid he used and I used the same characters and screenshots he also used in the original. I'm quite satisfied with the final result. My only complain is that the colors are really strong. I would desaturate the colors a bit.

Credit goes to Luigi53 for the Two-Face render and Hades for the Xbox One case.

I wish everyone best regards on your works this round!

I'm pretty sure I've lost now. I really like this one, I absolutely dig the color scheme and structure of the box. Although, my only complain would be the summary text on the back, I'd reckon a sans serif font that isn't all caps could work better, but other than that, it's cool. Good luck on the competition! :D

Thanks for the kind words man, and don't throw the towel yet I honestly think your box is as good as mine

Looks amazing, it's also very faithful to the original design. Not a fan of the font used on the back for the summary text though. Overall, amazing job!

On an off-topic, four Batman related boxes have been posted in the span of a day. inb4 BatmanBoxart.com

Good luck in the comp man, great box. Going to be a hard call with this