[ Buy Dangerous Wo... at Amazon 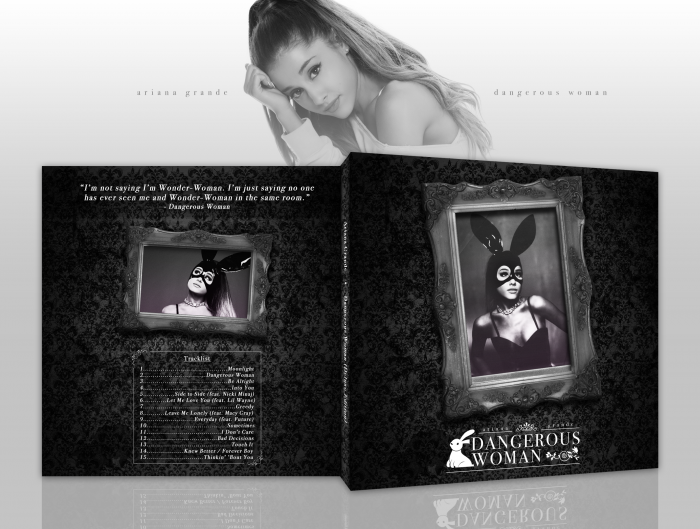 Hi!
So this has been a work in progress for a long time; I've been unable to finish it up until today as Ariana only just revealed the entire tracklist.

This is one of my personal favourite designs as I had a lot of fun designing it. I've also decided to change up my presentation and go for a 3D one (which I haven't done in a long time).

Thanks to Martiniii332 and FrankBedbroken for the early help in the WIP. I have to credit Martin for the logo too, as it was inspired by his Luigi's Mansion 2 logo (as he suggested to me).

Great job on this one, Nathan!

Though, just saying, no one has seen you and Ariana in the same room...

Yeah this is definitely your best cover. Captures her aesthetic, as a celebrity and for this specific album. Thanks for the shoutout, the logo looks great as well.

Thanks a lot Martin!

Thought I liked this already... nice work man looks great. This is my favorite cd case of yours, doesn't have any flaws imo

Thanks a lot Vince! I'm glad it's one of your favourites, this is my favourite cover I've designed :)

Congrats man. Was waiting for this to enter the Hall.

Hall of Fame with 25 favourites? Wow.. Anyway, thanks guys, this was a nice surprise ^~^