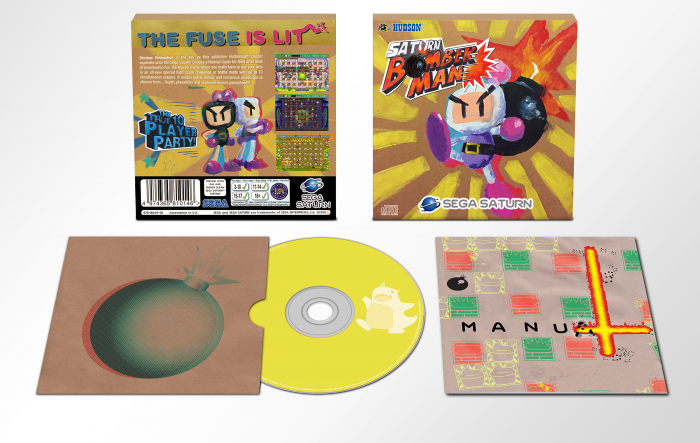 I was already working on this before the Hidden Gem competition so I thought I may as well. If I had known about it I maybe would have picked something more obscure. Regardless, it's not remembered by a lot of people and it's on a platform that isn't everyone's no.1 pick. It's in the red group because it's an action game.

I painted some of it but the CD cover and manual I thought would be too elaborate or take too much time. It was just better to do that digitally.

yo this is dope

It's rare to see a box art with a manual. Good job my man!

Bonberman nowadays is quite an underrated franchise anyway, I think only retro gamers would remember it

I have a question - did you draw some stuff with crayon, pencil, paint or something?

Some of it was made with paint (not MS paint :|). They were copied from official art and I made stencils.

@Legend_Chronicles2 digital stencils or... you made the stencil and scanned it?

@Higashi89 I drew it and cut it out. That wasn't digital. When I say copy i mean I looked at pictures of bomberman and drew him. I'm probably being complicated sorry.

@Legend_Chronicles2 No it's actually impressive

I love this game

def the best version of bomberman

@Mub it's the only one I can remember properly, it's very good