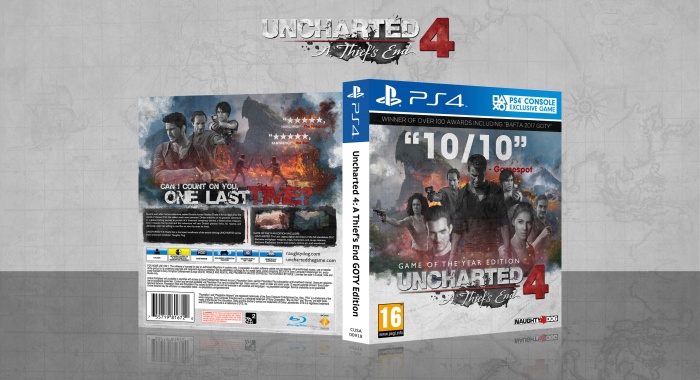 This time I tried to go for a more official look, hopefully I have done enough to accomplish that. I was very happy with the final result.

I decided to tackle a GOTY Edition style for this one, thinking what it would be like if Naughty Dog re-released the game with the upcoming standalone DLC and other extra and exclusive new features and game modes.

Massive thanks to AB501UT3 Z3R0 for the PS4 template and thank you as well to shiraziha and iman pro for the Nate and Sam renders!

Absolutely fantastic, everything is really well arranged and comes together really nicely. Having the same renders of Sam and Chloe on both sides of the cover is a little irritating but aside from that it's perfect :)

Thanks tombraider, appreciate it.

I was really happy with this work but the onething that also annoyed me was the repetitive use of the Libertalia view and the Sam/Chloe renders.

Wasn't a lot of renders or photos I can render from where they didn't look generic boring to use for the back. It's probably the most petty excuse but I definitely tried looking for them.

Again, thanks, glad you liked it :)

I'm sorry if I'm nitpicking, but the tagline on the back has some spacing issues and the word 'TIME' could be in the same size as 'ONE LAST'.

I just wish there was a bit more color on the overall box (besides the red and yellow) and the original color on the UC4 logo, would fit better on the front imo. (as it stands out more against the background)

I'll definitely go change the font size for that,

I'll also try adding a bit more blue to balance the colours out, I tried to last time but looked irritating so I'll try again. The update might take a while but I'll definitely take the time, thanks for spotting the issues!

good effort Venom . Everyone has already said what is lacking in it and i'm also not a big fan of gamespot rating otherwise good work man

- More Uncharted Blue both front and back
- A smaller size on "TIME" but made it slightly bigger than "One Last" just to make it stand out, thought it would look nice

As Pogo has already said
Me too don't like the gamespot

Great design, however one nitpick - I think the black and white elements on the cover could do with contrast adjustments. They look too 'greyed' out how they are currently - nothing wrong with that at all but I think the cover would look a lot better if there was more emphasis on making the blacks seem deeper than they actually are.

Thanks for the feedack XCore!

Front's awesome, but as for the back Bastart's comments are pretty spot on. Thanks for the design, and congrats!